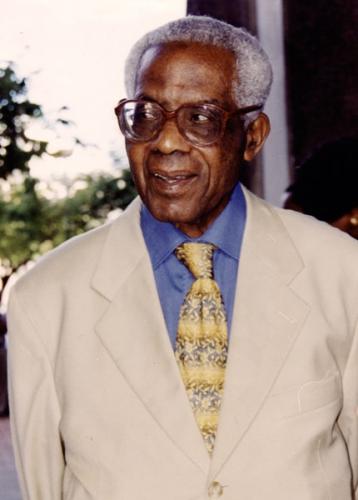 Legendary poet and politician, Aimé Césaire, was born on July 26, 1913 in the small town of Basse-Pointe on the island of Martinique. His father was a tax inspector and his mother a dressmaker. Unlike the majority of lower-class Martinicans, Césaire was taught to read and write in French at an early age. His family moved to Fort-de-France, the capital of Martinique, in order for Césaire to go to school at Lycée Schoelcher, the only secondary school for Martinique, Guadeloupe, and French Guiana until after WWII. Eugène Revert, Césaire’s geography teacher, identified the young student as a candidate for France’s highest liberal arts institution, Ecole Normale Supérieure. In 1931 Césaire went to Lycée Louis-le-Grand in Paris to prepare for entrance to Ecole Normale Supérieure.

In Paris, Césaire met Senegalese Léopold Sédar Senghor and French Guiana’s Léon Damas. Together they started the journal L’Etudiant Noir (The Black Student) in 1934 to bring together students from Africa and the West Indies. The journal explored the expression of a Pan-African worldview under colonization. The concept of Negritude, a word coined by Césaire, would be founded on these ideas. Through the journal, Césaire met his wife, Suzanne Roussy, also from Martinique, and they married in 1937. They had six children. In 1935 he began what would be his most renowned poem, “Cahier d’un Retour au pays natal” (“Notebook of a Return to the native Land”). Cahier focuses on alienation in the African Diaspora.

By 1939, Aimé and Suzanne Césaire returned to Martinique. With others, they launched the journal Tropiques, which emulated Surrealism, drew upon Marxism, and responded to the racist Vichy rule of Martinique. From this journal, Césaire received praise from André Breton, the leader of the French surrealist group.

Prominent in both the literary and political world, Césaire ran on the Communist party ticket and was elected mayor of Fort-de-France, the capital of Martinique, in 1945. A fervent anti-colonialist, he published Discours sur le colonialisme (Discourse on Colonialism) in 1950. The 1956 Letter to Maurice Thorez signaled Césaire’s official break from the Communist party, arguing that the race struggle should not be silenced by the class struggle. Césaire then founded the Martinican Socialist party, Partie Progressiste Martiniquais (PPM) in 1958. Césaire also served as a deputy in France’s National Assembly from 1946 to1956 and again from 1958 to 1993.

Forty-eight years after first being elected mayor, Césaire retired from politics in 1993. His last book of poetry, La Poesie, was published in 1994.