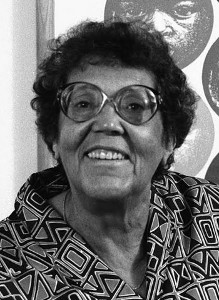 Elizabeth Catlett Mora was a prominent black political expressionist sculptor and printmaker in the 1960s and 1970s. Catlett was born to John and Mary Catlett who were public school teachers in Washington, D.C.  She was the youngest of three children. After graduating from Dunbar High School in the District of Columbia in 1933, she studied design and drawing at Howard University, also in Washington, D.C. She graduated cum laude in 1935, after changing her major to painting and studying with Lois Mailou Jones among other art professors. In 1940, Catlett became the first student to receive a master’s of fine arts in sculpting from the University of Iowa.

Catlett then briefly studied ceramics at the Art Institute of Chicago (Illinois) in 1941, followed by the study of lithography at the Arts Students League in New York City, New York between 1942 and 1943, during which time she was briefly married to fellow artist Charles White. She also studied individually with Russian sculptor Ossip Zadkine in 1943.

Catlett spent the majority of her adult life in Mexico, after winning a Rosenwald Fund Fellowship in 1946 to study wood and ceramic sculpting at the Escuela de Pintura y Escultura in Esmerelda, Mexico. In 1947 she married artist Francisco Victor Mora and became a Mexican citizen.  The couple had three sons including Juan Mora Catlett, a film director. Not long after moving to Mexico, Catlett became involved with the People’s Graphic Arts Workshop, a group dedicated to using art to promote social equality for impoverished black and Mexican people.

From 1958 to 1975, Catlett taught at the National Autonomous University of Mexico in Mexico City, where she became the first female professor of sculpture. She retired to Cuernavaca, Morelos in 1975.  Her artwork did not attain the same degree of fame in the United States as she enjoyed in Mexico until 1993, when her sculptures were selected for an exhibition at New York’s June Kelly Gallery. Since then, her work has been featured in solo exhibitions in Cleveland, Ohio, San Francisco, California, Chicago, Illinois, and Charlotte, North Carolina, and she has works featured in the collections of the Library of Congress, the Smithsonian, and New York’s Metropolitan Museum and Museum of Modern Art. Her African American inspired sculptures and prints have been recognized by the Women’s Caucus for Art and the International Sculpture Center, from whom she received the 2003 Lifetime Achievement in Contemporary Sculpture Award.