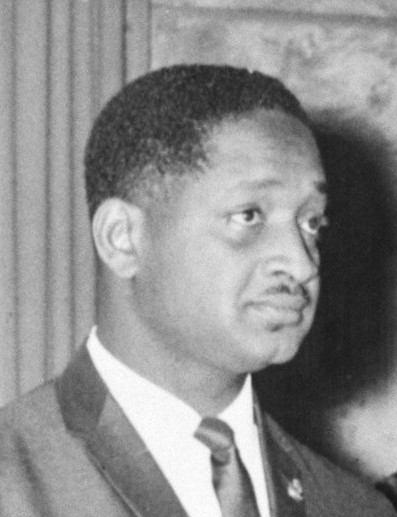 Linden Forbes Sampson Burnham, Prime Minister of Guyana from 1966 to 1980 and then President of the nation from 1980 to 1985, was one of the Caribbean region’s most controversial political leaders. He gravitated between support for Marxist regimes such as Fidel Castro’s Cuba and anti-communist nations led by the United States. Burnham was also Prime Minister of Guyana during the last years of British colonial rule, 1964 to 1966.

Forbes Burnham was born on February 20, 1923, in Kitty, a suburb of Georgetown, the capital city. Burnham had a distinguished academic record. After finishing at the elite all-male Queen’s College High School in Georgetown, he won a scholarship for study at the University of London.  In 1947 he received a law degree from the University.

Burnham was a descendant of formerly enslaved Africans who were originally brought to what was then British Guiana.  After slavery was abolished in 1834, British planters brought in indentured laborers from India. By the time of Guyanese independence in 1966, the Afro-Guyanese numbered approximately 220,000 of the nation’s 660,000 inhabitants (33%), while the Indo-Guyanese people at about 335,000 were 51% of the total population.  When colonial politics evolved into rivalry between these two groups, Cheddi Jagan would emerge as the leader of the Indo-Guyanese people while Burnham led the Afro-Guyanese.  British colonial administrators, afraid of the more radical Jagan, made Burnham the Premier of British Guiana during the last years of their rule.

Jagan and Burnham met while students at Queen’s College and the two co-founded the People’s Progressive Party, the first political party in British Guiana, in 1950. By 1955 they were bitter rivals, and by 1963 with both British and U.S. intelligence services fearful that the more radical Jagan might become the new nation’s leader, they helped engineer a constitutional conference in London involving Guiana’s political leaders who agreed to proportional representation voting.

In the 1964 elections, Jagan’s party received 45 percent of the vote and Burnham’s PNC received 40 percent, but the new constitution required a 50 percent majority of votes for a party to form a government. Burnham and the PNC allied with a small conservative party and formed a coalition government, allowing him to become Premier.  At the time of the country’s independence, his title was changed to Prime Minister.

Within months of taking office, however, Burnham decreed new national security laws, which permitted near unlimited search-and-seizure powers and detention without trial for up to 90 days.  Despite much of his socialist rhetoric, he remained closely allied with the United States and Great Britain.

In 1970, however, he abruptly changed direction and promoted Guyana’s alliance with Cuba, the Soviet Union, and other communist nations.  On February 23, 1970 he declared Guyana a “co-operative republic,” nationalized all foreign-controlled major industries, and banned all imports into the nation.  For the next 15 years Burnham led Guyana as a dictator supported by his People’s National Party. In 1980, for example, the constitution was changed to make the President, rather than the Prime Minister, the chief political figure in the nation.  Not surprisingly Burnham won the first presidential election despite large defections even from his Afro-Guyanese supporters.

Linden Forbes Sampson Burnham died in office on August 6, 1985 in Georgetown, Guyana.  He was 62.  He left behind his second wife, Viola Burnham, and six children.