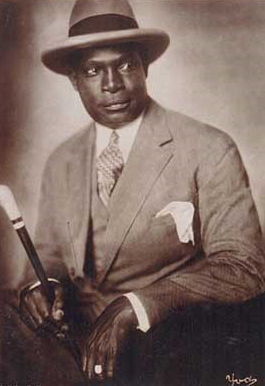 Louis Brody was a prominent German actor and musician. He was born M’bebe Mpessa in Douala, Cameroon, on February 15, 1892. Little is known about his early life in Cameroon, formerly known as Kamerun.  He attended the German colonial school in Douala where he learned to speak German. It is believed that Brody arrived in Berlin, Germany between 1907 and 1914 although it is unknown of what motivated him to relocate there.

Tall and physically imposing, Brody reportedly worked at a number of menial jobs before landing an acting role.  In 1915, he starred in the silent detective movie Das Gesetz der Mine (“The Rule of the Mine”) playing the role of an African man seeking revenge for his father’s death. As the German motion picture industry expanded in the post-war years, he appeared more frequently in supporting roles, most notably in Fritz Lang’s 1921 art film Der müde Tod (“The Weary Death”). He played the villainous “Moor” in Konrad Wiene’s 1926 colonial picture titled Ich hatt’ einen Kameraden (“I Had a Comrade”). By 1930, Brody became the most visible and highest-paid actor of African descent working in German cinema, having made at least 32 film appearances. During the 1930s, the rise of Nazism curtailed his career.  He acted in only 20 productions.

Brody was fortunate to survive during the occupation of the Nazi regime and precarious daily life in Germany.  He avoided deportation, sterilization, mob lynching, and the concentration camp.  During World War II, he starred in 14 films including two which advanced Nazi propaganda and were inherently anti-Semitic. When the Nazi government denationalized him through the 1935 Reichsbürgergesetz (Reich Citizenship Law), a law that stripped Jews of citizenship rights which also expanded to Romani (Gypsies) and blacks, he cleverly dodged persecution by acquiring French citizenship. Brody’s critics have pointed out the limited range of character roles he was allowed to play which, by and large, reinforced racial stereotypes; namely, servant, jungle primitive, sailor, porter, barkeeper, cook, chauffeur, and athlete. On the other hand, he demonstrated versatility in impersonating Arabs, Malays, Indians, Moroccan, and even Chinese despite his dark skin. In fact, his calling card read: “. . .performer of all exotic roles on the stage and in film.”

Brody throughout his lifetime fought to improve the social conditions in Germany. In 1918, he co-founded, along with other African immigrants, the Afrikanischer Hilfsversein (African Relief Organization) in Hamburg.  He became the spokesman for the group, deploring racial discrimination and violence directed at those of African descent.

In 1938, Brody married Erika Diek, a Cameroonian, but the marriage ended in divorce after several years. The couple had only a daughter. Between 1946 and 1951, Brody appeared in five movies and organized a revue of black entertainers in Germany. He also earned income as a singer, circus artist, and jazz band drummer.

Brody died of natural causes in Berlin on February 11, 1952 and was buried in Berlin-Hohenschönhausen cemetery.