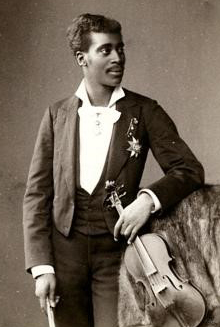 Internationally acclaimed Afro-Cuban violinist Claudio José Domingo Brindis de Salas y Garrido was born in Havana, Cuba, on August 4, 1852, the son of Claudio Brindis de Salas Monte, director of the popular orchestra Concha de Oro (Golden Shell) who played the violin and double bass, and his second wife, Maria Nemesia Garrido. The oldest of three sons, Brindis was initially taught the violin by his father, later by the Afro-Cuban Prof. José Redondo and the Belgian José Van der Gucht, and first performed solo in public at age eleven. After concertizing across the country with his talented family, his father won a lottery in 1869 and packed Brindis off to Europe to the National Conservatory of Paris in France (Conservatoire National de Paris) where the young prodigy studied under Charles Dancla and Ernesto Sivari.

For five successive years at the Conservatory, Brindis won the Premio de Honor and prepared to launch a career as a concert violinist, which commenced at the Salle Érard in Paris to the delight of the audience and critics who compared him to the legendary Niccolò Paganini. He next toured Italy, performing for enthralled audiences in Florence, at the Conservatory of Milan and Teatro Scala, and the Teatro Regio in Turin. While touring in Germany, critics hailed Brindis de Salas the “King of the Octaves.” At a performance in Warsaw, Poland, he was accompanied by the young Ignacio Paderewski whose career was just starting its ascent. He proceeded to St. Petersburg, Russia, and England, but during his musical conquests Brindis de Salas received news in 1872 of the death of his father in Cuba.

Brindis, who was fluent in seven languages, returned home in 1875 and was offered the directorship of Haiti’s Conservatory of Music. Concerts in Central America and Venezuela preceded concerts in Havana at the Teatro Payret and El Louvre in 1877, followed by a triumphal tour of the country. Over the next eighteen years he performed in Mexico, the United States, Puerto Rico, Trinidad and Tobago, Argentina, Spain, Portugal, and Germany, where Kaiser Wilhelm II awarded him the Order of the Black Eagles and made him a German citizen with the rank of baron. During his time in Germany, Brindis wed the noblewoman Ulrike von Knaebel, a marriage that produced three children.

On a tour of Cuba in 1895, a time of revolution and repression, Brindis de Salas found little interest in his music, and his brilliant career began to falter.  Still hopeful he returned Europe but his “wandering” led his wife to divorce him.

The new century was cruel to the once proud man honored by European royalty, proclaimed the “Black Paganini,” and envied as “Caballero” of the Légion d’Honneur. In 1911, Brindis retreated to Buenos Aires, Argentina, scene of his former greatness where two decades earlier he was much admired. But no one came to rescue the impoverished, ragged, forgotten, and desperate man found mute, alone, and dying of tuberculosis in a filthy room. Brindis de Salas sold his Stradivarius for ten pesos.  He died on June 2, 1911. His remains rested in the city’s Cemeterio del Oeste until they were transferred in 1930 to the Cemeterio de Cristóbal Colón in Havana.