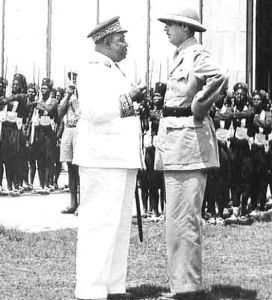 Félix Éboué and Charles DeGaulle at Brazzaville, 1944
Fair use image

The Brazzaville Conference was organized during the Second World War and took place in Brazzaville, the capital city of the colony of French Equatorial Africa from January 30 to February 8, 1944.  The Conference was sponsored by the French Committee of the National Liberation (CFLN). General Charles de Gaulle opened the Conference that brought together the representatives of the French territories of Africa. It met to determine the role and future of the French colonial Empire and to design the reforms that would perpetuate it.

Brazzaville was chosen because it was the bastion of African Gaullism and the capital of Free French Africa: it was in this city, in October, 1940, that de Gaulle established the Council of Defense of the Empire and signed an important Manifesto that placed Free France in the republican and democratic tradition.

The origins of the Conference were diverse: there was the Brazzaville Colonial Summit organized under the Third Republic held from December, 1934 to April, 1935 and the November, 1936 conference organized on the initiative of Marius Moutet, the Minister of the Colonies for the French political party then known as the Popular Front.

The 1944 Conference was also the capstone of the reforming will expressed by the leaders of Free France. De Gaulle in his speech of April, 1941 before the Royal African Society of London (UK), had called for the necessary “transformations,” which must open for Africa “the road of a big future” to allow her “to choose nobly, liberally the road of modernity.” To implement this vision, Félix Éboué, Governor General of Free French Africa, Henri Laurentie, his General Secretary until 1943, and Pierre-Olivier Lapie, Governor of the Chad from 1941 to 1942, began to challenge the conservatism of the colonial authorities who viewed France’s African colonies as perpetually subservient possessions.

In an important circular dated November 8, 1941, Éboué called for restoring the status of “evolved notable,” trying in this way to give more political responsibilities to educated African elites.  His ideas were embraced in the 1944 Brazzaville Conference.

After the Second World War, de Gaulle and other French leaders kept most of the promises made at Brazzaville.  In 1945, three elected representatives of the overseas French colonies in the West Indies and Africa claimed seats in the National Assembly in Paris for the first time.  One of the three representatives was Madame Eugenie Tell Éboué, the widow of Félix Éboué who was chosen to represent Guadeloupe, the French colony in the West Indies.