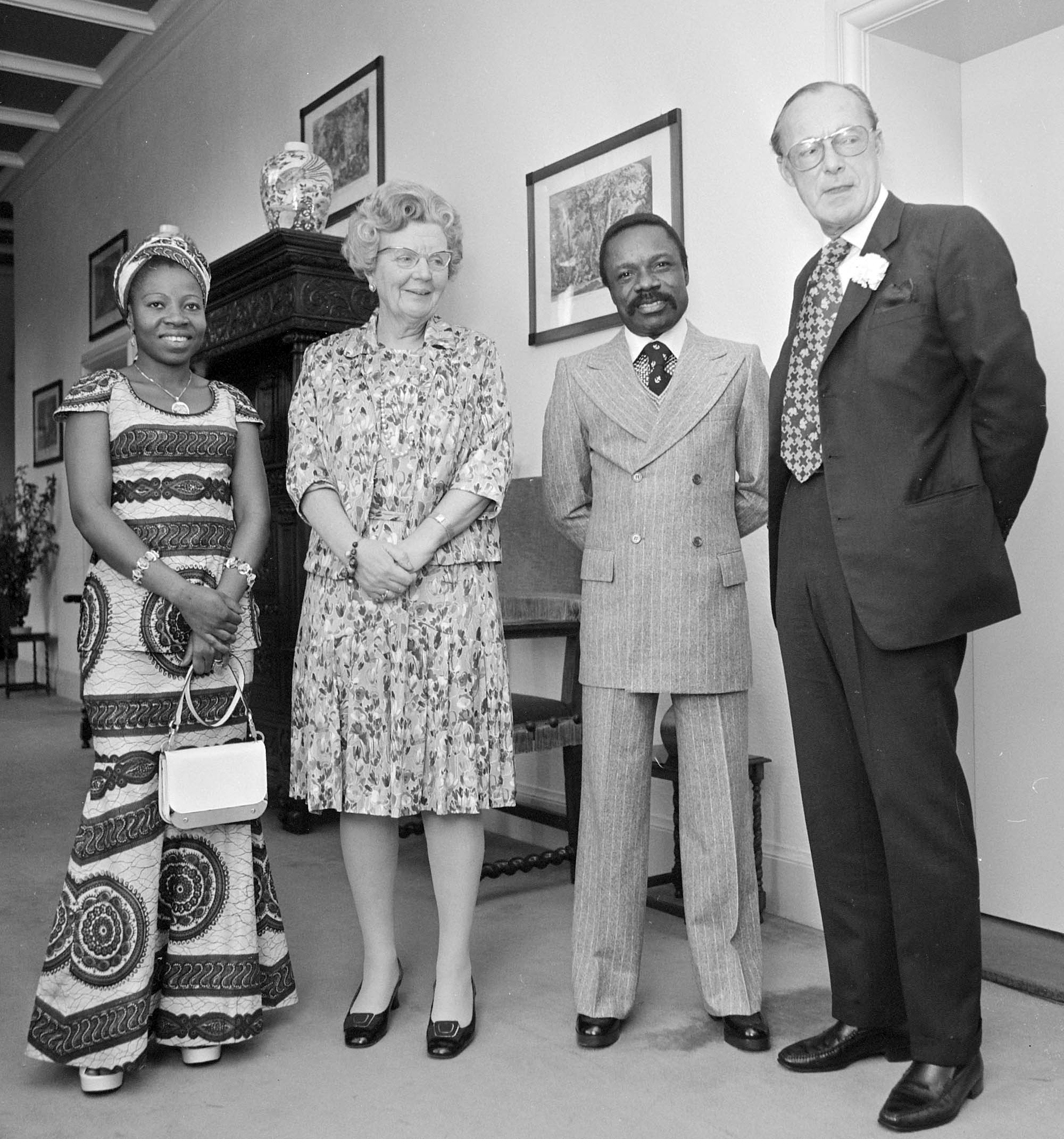 Omar Bongo was President of Gabon from 1967 until his death in 2009, over 42 years, and thus ruled longer than any other African leader.  Bongo was born in the Beteke region of Gabon on December 10, 1935.  He was the youngest of twelve children and was a member of the Bateke people.  Named Albert-Bernard Bongo at birth, he later converted to Islam in 1973, changing his name to El Hajj Omar Bongo.  In 2003 he added Ondimba, his father’s name.

Bongo’s first wife was Marie Josephine Kama and they had two children together, but they divorced in 1986.  In 1990, Bongo married Edith Lucie Sassou-Nguesso, daughter of President Denis Sassou-Nguesso of the Republic of the Congo (Congo-Brazzaville), and together they had nine children.

After completing primary and secondary education in Brazzaville, then the capital of French Equatorial Africa, he joined the French Air Force and rose to the rank of captain.  When Gabon was granted independence from France in 1960, Bongo quickly rose to political power. At the age of 28, he was placed in the Cabinet of Gabon’s first President, Leon M’Ba.  That appointment led to other political roles including his becoming Vice President of Gabon at the age of 32 in March 1967.  In November 1967, following the death of M’Ba, Bongo became the second President of Gabon.

Soon afterwards Bongo designated his Parti Democratique Gabonais (PDG) as the only political party.  As head of the PDG and with only token opposition he was reelected President 1975, 1979, 1986, and 1993 despite repeated assertions that the vote was rigged.  In 2000, however, due to growing public opposition and international condemnation, Bongo ended the one-party state rule.  Bongo survived multi-party democracy in Gabon for the last decade of his rule by incorporating opposition leaders into his regime.

Omar Bongo remained in power because of his control over the army and because of Gabon’s elite class personally benefitting from his rule.  Royalties from Gabon’s rich petroleum reserves as well as other public funds were siphoned off by Bongo, his family, and prominent government officials and wealthy businessmen.  Often these funds were placed in various foreign bank accounts or invested in European properties.  Bongo’s reach extended to France where in 1981 he helped bankroll the successful presidential campaign of Jacques Chirac.  Over the next two decades Bongo contributed to all of the major French political parties which ensured that country’s support for his regime.

Although Bongo was known as one of the most corrupt African rulers he also developed a reputation as a peacemaker for his attempts to bring together warring factions in Chad, the Democratic Republic of Congo, Angola, and Burundi.  Also in 2000, Bongo personally bought thousands of dollars worth of computers and textbooks to end a student protest for better materials at Omar Bongo University (formerly the University of Gabon), the county’s only university which in 1978 was renamed in honor of Bongo.

Omar Bongo died on June 9, 2009 in Spain.  His body was flown back to Gabon where a state funeral was held.