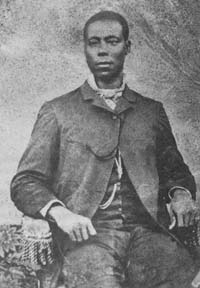 Paul Bogle led the last large scale armed Jamaican rebellion for voting rights and an end to legal discrimination and economic oppression against African Jamaicans.  Because of his efforts Bogle was recognized as a national hero in Jamaica in 1969.  His face appears on the Jamaican two-dollar bill and 10-cent coin.

Paul Bogle was born free to Cecelia Bogle, a free woman, and an unknown father in the St. Thomas parish in 1822.  Bogle’s mother soon died and he was raised by his grandmother.  As an adult Bogle owned a home in Stony Gut and had another house in Spring Garden as well as a 500 acre farm at Dunrobin making him one of the few African Jamaicans prosperous enough to pay the fee to vote.  In 1845, for example, there were only 104 voters in St. Thomas parish which had an adult population of at least 3,300.

Bogle became a supporter of George William Gordon, an Afro-Jamaican politician and fellow landowner and Baptist.  In 1854 Gordon made the 32-year-old Bogle a deacon.  Bogle, in turn, built a chapel in Stony Gut which held religious and political meetings.

Officially Jamaican slavery ended in 1833 after the Sam Sharpe Rebellion a year earlier.  Yet from 1834 to 1838 former slaves served post-servitude “apprenticeships” to their former owners.  They were also subject to a judicial system controlled by the Colonial government primarily for the benefit of the former slaveholders.  They endured unemployment and taxes but low wages. In 1865, Gordon chose Bogle to lead a delegation to present their complaints to British Colonial governor, Edward John Eyre.

In August of that year Bogle led a 50 mile march of small farmers and former slaves to Spanish Town to meet with Governor Eyre to discuss their political grievances.  They were denied an audience with the governor.

Two months after that attempted meeting, the Morant Bay Rebellion started, sparked by the arrest of a supporter of Bogle for protesting the conviction of another black Jamaican for trespassing on a long-abandoned plantation.  Bogle and his supporters attended the trespassing trial in Spanish Town on October 7. Shortly afterwards when colonial officials attempted to arrest the Bogle supporter who had also attended the trial, he was immediately freed by Bogle’s other supporters.  They then forced Colonial police to release the man convicted of trespassing. Returning to Stony Gut, Bogle and his supporters learned that warrants had been issued for the arrest of 28 men for rioting in Spanish Town.  When the Colonial police attempted to arrest Paul Bogle, his followers fought them off.

On October 11, 1865, Bogle and his brother Moses led a protest march of nearly 300 people from Stony Gut to the Morant Bay Courthouse in Spanish Town.  They were confronted this time by the colonial militia who opened fire on them, killing seven of the protesters.  The protesters retaliated by killing a parish official, Baron von Ketelhodt, and fifteen militia members.  They then set 51 prisoners free.

Colonial soldiers were now brought to Morant Bay to crush the rebellion.  Nearly 500 people were killed and a greater number were flogged before “order” was restored.  Stony Gut, considered the stronghold of the rebels, was destroyed.  Paul and Moses Bogle were captured and hanged on October 24, 1865 at the Morant Bay Court House a day after George William Gordon, who did not participate in the rebellion, was executed.

In January 1866, a Royal Commission was sent from London to investigate the Rebellion.  Following their investigation Governor Eyre was dismissed as the Governor of Jamaica, and then charged but not convicted of murder.  Jamaica became a Crown Colony governed directly from England as a result of the rebellion.