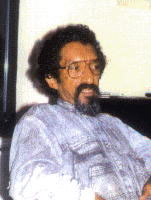 Born in Ethiopia in 1937, Alexander Skunder Boghossian first rose to prominence at the age of 17 when he won second prize for his painting at the Jubilee Anniversary Celebration of Ethiopia’s Emperor Haile Selassie I.  The following year he was awarded a scholarship to study in London, England at St. Martin’s School and the Slade School of Fine Art.  He later moved to Paris, France, where he remained for nine years as both student and teacher at the Academie de la Grande Chaumiere.  While in Paris he interacted with African artists and intellectuals who were part of the Negritude movement.  He also encountered the work of the French surrealists. Some of the artists who influenced Boghossian include Paul Klee, Roberto Matta, and the Afro-Cuban artist Wilfredo Lam.

Boghossian in 1966 returned to Ethiopia and taught at the School of Fine Arts in Addis Ababa.  He moved to the United States in 1970 and two years later was appointed as a faculty member at Howard University in Washington, D.C. His work, described as “a perpetual celebration of the diversity of blackness,” has been on display throughout the world including the Smithsonian Institution’s National Museum of African Art and the Museum of Modern Art in New York.  Boghossian was the first contemporary African artist to have his work purchased by the Museum of Modern Art.

Alexander Skunder Boghossian died in Washington, D.C. on May 6, 2003, within days of the opening of an exhibit of his work titled “Ethiopian Passages: Dialogues in the Diaspora.”

Saheed A. Adejumobi, The History of Ethiopia (Westport: Greenwood Press, 2007)