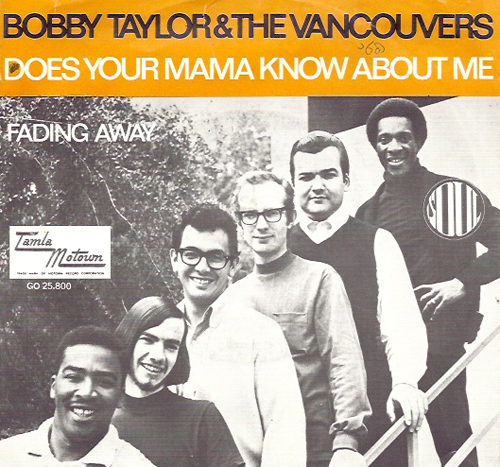 Bobby Taylor & the Vancouvers, an interracial and international R&B band, began when Thomas (Tommy) Chong invited Bobby Taylor, whom he had met in San Francisco, California, to become the lead singer for the Canadian group the Calgary Shades in 1961. The ensemble included Chong and two Black musicians, Albert Leroy Harrison and Wes Henderson. In 1963, they changed their name to Little Daddy and the Bachelors.

Bobby Taylor & the Vancouvers, however, were formed in Vancouver, British Columbia, Canada, in 1966 with Taylor as the lead singer.  Taylor was born Robert Edward Taylor in Washington, D.C., on February 18, 1934, to Raymond Taylor and Ethel Mae Kemp Taylor. Taylor moved to Columbus, Ohio, to join relatives and graduated from the city’s racially segregated Spencer High School in 1952.

Guitarist Chong (born May 24, 1938 in Edmonton, Canada) and singer Harrison remained with Taylor and the Vancouvers, and they were joined by percussionist Duris Maxwell (born June 15, 1946) and pianist Robbie King (born May 27, 1947). Maxwell and King were born in British Columbia. As a consequence, Bobby Taylor and the Vancouvers were a tri-racial, black, white, and Asian American ensemble and an international band since three of the members were from Canada.

As the ensemble gained popularity in Vancouver, Mary Wilson and Florence Ballard of the Supremes who were visiting the Canadian city saw their performance and contacted Motown Records. The group was invited to Detroit and signed with Motown in 1967. Their first hit with Motown came in 1968 and was called “Does Your Mama Know About Me” from their album, Bobby Taylor And The Vancouvers. The single peaked at no. 29 on the Billboard Hot 100 and became their biggest seller. Their follow-up single, “I am Your Man,” reached no. 5 on the U.S. R&B chart while “Malinda” later that year reached no. 16. At the height of their popularity, Chong and Henderson were fired by Motown producer Johnny Bristol for missing performances. Chong then became one half of the Cheech and Chong comedy duo.

Taylor is credited with getting Michael Jackson and his brothers their first record deal after seeing them perform at the Regal Theater in Chicago in 1968. In 1975, Bobby Taylor and the Vancouvers released “Why Play Games” which peaked at no. 83 while their next single, “Fading Away,” did not chart on the Billboard Hot 100 although it had modest success in Canada.

Bobby Taylor left Motown Records in 1976 but could not revive his career after the departure. He signed with lan Levine’s Motor City label and brought other former Motown performers to the company.

Robbie King, one of the original members of the group, died at the age of 56 on September 27, 2003, in Vancouver. Albert Leroy Harrison, 75, died on August 24, 2008, in Gary, Indiana. In 2006 Taylor moved to Beijing, China, to start a recording studio. He left Beijing for Hong Kong in 2009 where he began performing in nightclubs. By 2011 he was writing for the South China Morning Post.

Robert Edward Taylor, the father of 12 children, died on July 22, 2017, in Hong Kong. He was 83 and had been undergoing treatment for cancer.