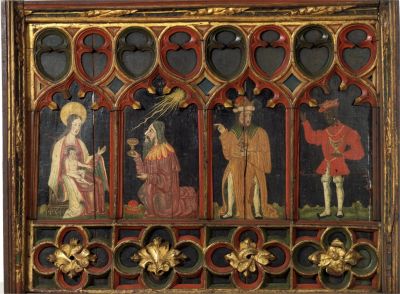 The black Magus, or King, in Renaissance Adoration pictures is an enigmatic figure as no black African king is known to have visited Europe during this period. However, blacks, at the time, were known in a wide range of other guises from slaves to saints.

The image developed over time as biblical study, Renaissance courtly practice, and artistic tradition became conflated and amplified.  The Adoration story is found only in Matthew’s Gospel, and there only the Virgin and Child appear. The missing elements, the Star, the Three Magi or Kings, were added through inference by scholars attempting to validate and reconcile the New and Old Testaments. The black presence in the Adoration scene perhaps has its origins in the black African musicians found in 12th century Islamic courts.  The Normans copied this Islamic custom and the German Holy Roman Empire in turn copied the Normans. Black Musicians eventually reached 16th century England as evidenced by John Blank at the Tudor court.

Spiritually, the Adoration represented the Epiphany, which was one of the major holidays of the early Christian Calendar.  The holiday celebrated the visitation of the first gentiles, the three Magi (kings) representing the whole of mankind, to the infant Christ.  It presented the relationship between Church and State as these earthly Kings paid homage to a higher authority, Christ, the King of both Heaven and Earth.

Exactly how one of the Adoration Magi became black is debatable. What is certain is that 14th century Cologne, Germany played a leading role in creating this image, for three reasons. First, the patron saint of the city was St. Maurice who was depicted as black.  The city had three Magi on its coat of arms one of which was represented as black.  There is also a 13th century shrine to the three Magi in the city’s cathedral.

The image moved beyond Germany when the artist Hans Memling (c. 1430 –1494) originally from Flanders (now part of modern day Belgium), chose to copy the renowned Columbia Adoration Altar piece by his former master Jan van Den Weyden (c. 1400 –1464), and made one telling alteration. He painted its third white Magus as black.  Memling’s Adoration iconography was copied by the leading artists of the day and through those copies, the image spread throughout Europe as reproductions by artists of varying skills.

The black Magus challenges the stereotypical Renaissance concept of a black African in that rather than portrayed as a barbarian, his fashionable, often outlandish, clothes signified him to be civilized. In addition to his blackness, he has three distinct attributes to indicate his exoticism to Renaissance viewers: he wears earrings (no white Magus has been found to be wearing one), opulent dress, and is presented as narcissistic, all emphasizing his “otherness” and creating a cultural divide between himself and the white Magi.  The divide is further emphasized by him invariably being last in the line.

The black Magus image remains alive today, as seen on the coat of arms of Pope Benedict (1927–  ) as well as in German Christmas cards and carved Nativity models.