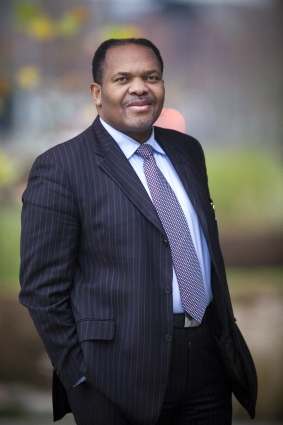 Belgian parliamentarian Bertin Mampaka was born in the capital city of Kinshasa in what is now the Democratic Republic of the Congo (formerly Zaire), on April 6, 1957. He is the son of a traditional Kasai chief and politician. Early on Mampaka exhibited a penchant for mathematics and science and after completing studies in physics at Saint-Louis College (Collège Saint Louis de Kananga) in Katanga, he moved to Belgium to enter the University of Mons-Hainaut (Université de Mons-Hainaut) in 1979. Three years later he acquired a tax advisor’s diploma from Haute École de la Communauté Française du Hainaut (High School of the French Community of Hainaut) and resumed study in economics at the University of Mons-Hainaut where he earned his degree in taxation in 1982, associate degree in economics in 1984, and the agrégation in economics (i.e., he passed civil service examination to teach) in 1985. He next worked in a family-owned food distribution and hospitality business until joining an international corporation as its marketing director. From 1990 to 1993 he was Vice President of the PDSC (Congo’s Social Christian Democratic Party) for Benelux, a political-economic union of Belgium, the Netherlands, and Luxembourg; and he began teaching as an economics professor at Haute École de la Communauté Française du Hainaut, a position he held for eleven years.

Mampaka began is career in politics in 1994 when as a member of the PSC (Parti Social Chrétien) in the district of Soignies he was elected its representative. He paid special attention to African constituents in Wallonia and Brussels. In 1999 he was the first person of Sub-Saharan origin elected to sit in the Chamber of Representatives for the Brussels-Halle-Vilvoorde district and the following year was the first communal councilor and black police advisor for the city of Brussels. By 2004 when he was Brussel’s Alderman for Sports, Environment, Green Spaces, Energy, Municipal Equipment and International Solidarity, running as member of Centre démocrate humaniste (or cdH, new name of the old PSC), he was elected Brussels’ regional Deputy. On October 19, 2011, Mampaka was elected Vice President of the Brussels Parliament, another first for a person of African ancestry, and in 2012 was made a Councilor of the city of Brussels. With a demonstrated record of past achievements, in 2013 he was appointed Senator (Sénateur de Belgique) with a seat in the Belgian Parliament.

One of the proudest moments in Mampaka’s political career occurred when with his leadership and after years of proposals and debate, the Brussels City Council in 2018 voted unanimously to dedicate a public square in honor of Patrice Lumumba, the first Prime Minister of the Congo. The square features a “movable” statue of the this leader who was assassinated in 1961 but is still revered by the Congolese community in Brussels. The press in Africa, in particular the Congo, a former colony of Belgium, has interviewed and reported on its native son’s accomplishments in faraway Europe. Married since 1984 to Fabienne Mampaka, they have two children and reside in Brussels.