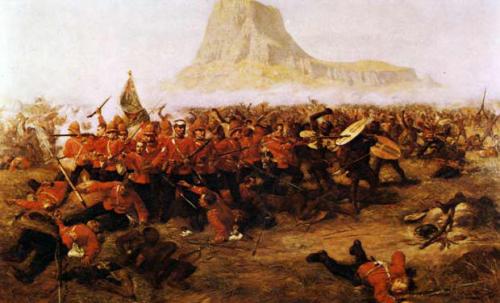 The Battle of Isandlwana, January 22, 1879, was the first engagement of the Anglo-Zulu War and would prove to be a significant and unexpected victory for the Zulu in a war which they ultimately lost to the British.

Since the British arrival in South Africa at the beginning of the 19th Century, Zululand had proved a troublesome nation in their efforts to control the region. During the first three decades of the century the British made no attempt to challenge Shaka, the founder of the Zulu Empire, and his immediate successors. From the 1840s through the 1860s however, British (and Boer) power gradually increased as Zulu military control grew weaker. By the 1870s the Zulu Empire threatened British expansion into the diamond and gold-rich interior. In 1878 the British High Commissioner of Southern Africa, Sir Bartle Frere, provoked a war with the Zulu, hoping for a sharp, short attack leading to the destruction of Zulu military power.

On December 11, 1878 Frere sent an ultimatum to Zulu King Cetshwayo, ordering him either to dismantle the military system of his nation or else face war with the British Empire. Cetshwayo had long made efforts to avoid outright war with the British; however he found it impossible to comply with this request and, just as Frere had anticipated, he refused to disband his army and instead prepared for war against the British.

On the 22nd January 1879 the British invaded Zululand. Their army was composed of nearly 1,800 troops, made up of both British and African men from the neighbouring British colony of Natal. Although they faced a force of roughly 20,000 Zulu warriors, the British felt assured of their victory due to superior military resources. However, the battle which ensued would prove to be an embarrassing defeat for the British as they were out-manoeuvred by Cetshwayo’s men. By the end of the battle the British had lost around 1,300 of their force of 1,800 while the Zulus suffered a relatively light loss of around 1,000 men.

The Zulus’ triumph, however, would not last long. In order to preserve the Imperial image of power and prestige and to avoid the Zulu victory inspiring other nations to revolt against British colonial rule, they launched a nine-month counteroffensive that would engage at least 17,000 British troops, the largest Army they sent to Africa. Britain would emerge victorious in this Anglo-Zulu War after their forces captured Cetshwayo on August 28, 1879, forcing him to agree to the dismantling of the Zulu Empire into 13 small states. Eight years later, on May 9, 1887, all of these states were annexed by the British. The Battle of Isandlwana, however, would remain an important landmark in the history of Africa as an example of defiance against European Imperialism.