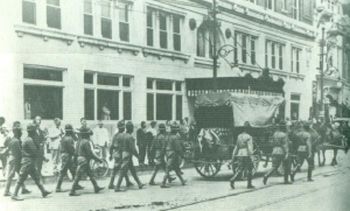 The Battle of Carrizal was fought between the Buffalo soldiers of the 10th Cavalry of the United States Army and Mexican army troops on June 21st, 1916. The battle nearly resulted in war between Mexico and the U.S., but with US-German relations souring because of World War I, President Woodrow Wilson was inclined to negotiate, and the two nations were able to avoid declarations of war.

In March 1916, 500 Mexicans led by Pancho Villa raided the border town of Columbus, New Mexico. The town was defended by over 300 members of the U.S. 13th Cavalry. Villa’s men burned parts of the town and looted ammunition and horses before they were chased back into Mexico by the 13th Cavalry. Approximately 80 Mexicans and 18 Americans died. The attack on Columbus provoked a harsh, swift response from the United States government.  General John J. Pershing was placed in command of a military expedition to find and capture or kill Pancho Villa and to stop cross-border raids on American towns. This expedition of 4,800 men was officially called the Mexican Expedition, but was also colloquially called the Pancho Villa Expedition or the Punitive Expedition.

United States troops fought several skirmishes with Villa’s men as they marched southward from El Paso in pursuit. An American army roaming the countryside in Mexico during that nation’s Mexican Revolution created considerable tension between the two nations. The new Mexican government of Venustiano Carranza sought to limit the Americans’ movements within Mexico, and General Pershing wanted to move freely to complete his mission.

In June, Pershing received intelligence that Villa was at Carrizal, in the state of Chihuahua. He selected Captains Charles T. Boyd and Lewis S. Morey to lead approximately 100 soldiers from Troops C and K of the 10th Cavalry to investigate.  They encountered 400 Mexican Army troops, or Carrancistas, instead of Pancho Villa’s men. The Mexican soldiers told the Americans to turn back northward. Captain Boyd refused and ordered his men south through the town anyway, which caused shots to be fired. Both sides suffered large losses. Captain Boyd and 10 soldiers were killed and another 24 were taken prisoner. Twenty-four Mexican soldiers were killed, including their commanding officer General Felix Gomez, and 43 were wounded.

General Pershing was furious at this result and asked for permission to attack the Carrancista garrison at Chihuahua. President Wilson, fearing that such an attack would provoke a full-scale war with Mexico, refused. The Battle of Carrizal marked the effective end of the Mexican Expedition, which failed in both its missions. Pancho Villa survived, and small raids on American soil occurred while the expedition was in Mexico.