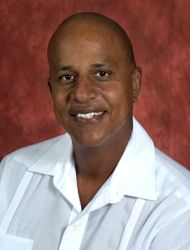 On February 7, 2008, Belize elected Dean Barrow as its first black Prime Minister. Born March 2, 1951, in Belize City, Barrow earned his LL.M. from the University of Miami in the United States and became partner at a Belizean law firm in 1977.  Two years later he established his own practice. Barrow married his long-term girlfriend, Kim Simpliss, in 2009, and they have one child together; he also has three children from a previous marriage with Lois Young.

The nation of Belize attained independence from the British in 1981, and Barrow entered politics two years later when he was elected to the Belize City council in 1983. Barrow broke into the national political scene in 1994 when he ran as a candidate under the United Democratic Party (UDP) banner during parliamentary elections.   Barrow won the election and the attention of Prime Minister Manuel Esquivel (1984-1989), who appointed the 33 year old attorney to his executive cabinet as Minister of Foreign Affairs on December 17, 1984. In June of 1986, Barrow, while still serving as Minister of Foreign Affairs, received a second appointment to serve as Attorney General.

After Esquivel lost the 1989 election, Barrow became deputy leader of the UDP in 1990. In 1993, Belize elected Esquivel as Prime Minister for a second term, and he again appointed Barrow to serve as Minister of Foreign Affairs. In addition to his previously held duties, during Esquivel’s second term (1993-1998), Barrow also served as Deputy Prime Minister. One of Barrow’s most famous political endeavors during this term was establishing ambassadorial level diplomatic relation between Belize and Cuba in 1995.

Said Musa replaced Manuel Esquivel as Prime Minister in 1998, and Barrow, leaving the executive cabinet, became the outspoken leader of the now opposition UDP Party.  In April of 2005, when Belize experienced strikes, demonstrations, and protests nationally over tax increases and government corruption, Barrow became the champion of the protestors, making public statements on their behalf and supporting their acts of civil disobedience. With this support Barrow and the UDP won a landslide electoral victory in 2008, with 56.6% of the vote and 26 of 31 seats won by the UDP.  As the leader of the United Democratic Party, Dean Barrow became Prime Minister.