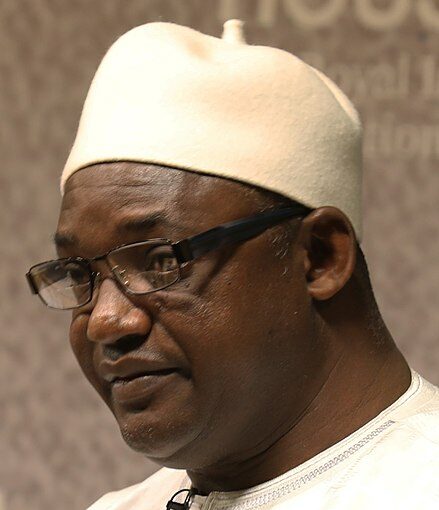 Adama Barrow is a Gambian politician and real estate developer who is the third and current president of Gambia. Barrow defeated Yahya Jammeh in the 2016 Gambian presidential election, but because the incumbent president initially refused to recognize the victory, Barrow was inaugurated at the Gambian embassy in Senegal on January 19, 2017. He returned to Gambia on January 27, 2017.

Barrow was born on February 16, 1965, in Mankamang Kunda, British Gambia (Gambia), in a small village near Basse Santa Su to Mamudu Barrow and Kaddijatou Jallow, two days before Gambia achieved independence from the United Kingdom. Barrow attended Koba Kunda primary school, Crab Island secondary school, and then received a scholarship to the Muslim High School located in Banjul, the capital of Gambia.

After graduation, Barrow worked for Alhagie Musa and Sons, a Gambian energy company where he became a sales manager. Barrow moved to London, England, in the early 2000s, where he studied for a degree in real estate while working as a security guard to help finance his education. Barrow returned to Gambia in 2006 and founded Majum Real Estate. He remained CEO of the company until 2016.

On October 30, 2016, Barrow was chosen by a coalition of seven opposition parties as their endorsed candidate for the 2016 Gambian Presidential Election. Before being a presidential candidate, Barrow had not previously held any elected office, but he had served as treasurer of the United Democratic Party (UDP). He resigned from the UDP on November 3, 2016, to run as an independent with the backing of Coalition 2016. During the campaign, he promised to return Gambia to its membership in the Commonwealth of Nations and the jurisdiction of the International Criminal Court. He also promised to reform security forces, suggesting that they should be “distanced from politics.” He also said that if elected he would create a temporary transition government formed of members from the opposition coalition and would step down within three years. Barrow won the election held on December 1, 2016, with 43.34 percent of the vote, Yahya Jammeh won 39.6 percent of the vote, and a third-party candidate Mama Kandeh won 17.1 percent of the vote.

Jammeh at first accepted the result but later rejected it, forcing Barrow to flee to neighboring Senegal for his safety. Barrow was later inaugurated at the Gambian Embassy in Senegal on January 19, 2017, and Jammeh agreed to leave Gambia and go into exile on January 21, 2017. Barrow returned to Gambia on January 27, 2017, with hundreds awaiting him at the Banjul airport to welcome him home.

Barrow is a devout Muslim who follows Sunni Islam. He practices polygamy and has two wives, Fatoumatta Bah and Sarjo Mballow. Barrow also has five children.  His eight-year-old son, Habibu Barrow, died after being bitten by a dog on January 15, 2017. Barrow could not attend his son’s funeral in Banjul because of security reasons.