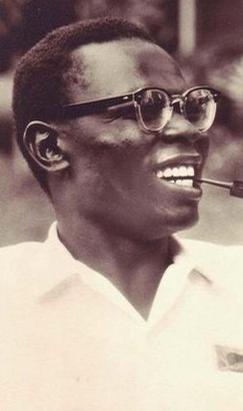 Barack Obama Sr., father of the 43rd President of the United States, was born in the Rachuonyo District, in the then British colony of Kenya, on June 18, 1936, to Onyango Obama and Habiba Akumu Nyanjango. He was raised in the Nyang’oma Kogelo village, Siaya District of the Nyanza Province. Obama converted from Islam to Anglicanism at the age of six while attending a Christian missionary school and changed his name from Baraka to Barak. His parents separated when he was nine years old, and he was raised by his stepmother, Sarah Ogwel. He attended Gendia Primary School, Ng’iya Intermediate school, and later Maseno National School, an exclusive Anglican boarding school. Later in life he became an atheist and believed that religion was just superstition.

Obama married his first wife Kezia Aoko in 1954, and the couple had two children, Malik and Auma. In 1959 he was selected for a special academic program and traveled to the United States to enroll as the first African foreign student to study at the University of Hawaii at Manoa in Honolulu. He graduated in 1963 with a BA in Economics and while there was inducted into the Phi Beta Kappa Honor Society. Also, while in Honolulu he met and married 18-year-old Stanley Ann Dunham in 1961. The couple had one child together, future U.S. President Barack Hussein Obama Jr. They divorced three years later in 1964.

In June of 1962, Obama left Hawaii, and moved to Cambridge, Massachusetts, to attend Harvard University, where he met Ruth Beatrice Baker. After graduation in 1964, Obama returned to Kenya, with Baker in tow, and they married later that year. The couple had two sons, Mark and David, and divorced in 1973.

Obama began to work for an oil company as an economist in Kenya. He was promoted to the economist for the Kenyan Ministry of Transport, and eventually senior economist in the Kenyan Ministry of Finance. He also reunited with his first wife Kezia and had two additional children, Abo and Bernard. Obama wrote an entry for the East Africa Journal which appeared in July 1965 titled “Problems Facing Our Socialism,” that set his at odds with then Kenyan President Jomo Kenyatta and much of the nation’s political establishment. When Tom Mboya, Minister of Economic Planning and Development, was assassinated in 1969, Obama came under suspicion. He believed he was now a target of the government. He was fired and blacklisted in Kenya and found it difficult to find and hold down a job.

In 1970 Obama was hit by a car in 1970, an incident that left him in the hospital for almost a year. Obama then traveled back to Hawaii and stayed for the month of December in 1971. It was then that he visited his son Barack, who was ten years old, giving him a basketball and taking him to a jazz concert. The two never saw each other again.

Upon his return to Kenya, Obama was involved in a second car accident that claimed both of his legs. He met Jael Otinyo, with who he had a son named George. The couple never married but just six months after the child’s birth, Obama was in a third car accident in Nairobi on November 24, 1982 and died of his injuries at the age of 46.