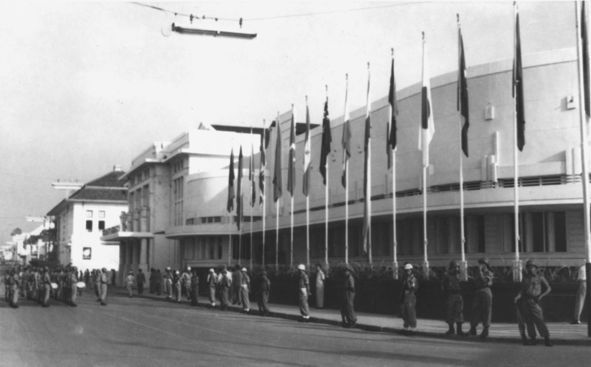 The Afro-Asian Conference, known generally as the Bandung Conference, was to that date the largest gathering of Asian and African nations.  On April 18 to 24, 1955, twenty-nine representatives of nations from Africa and Asia came together in Bandung, Indonesia, to promote African and Asian economic coalitions and decolonization.  The Conference expressly declared its opposition to both colonialism and neocolonialism not only by the European powers then in Africa, Asia, and Latin America, but also by the United States and the Soviet Union.

Of the twenty-nine nations that were represented in the Bandung Conference, six were from Africa: Egypt, Ethiopia, Gold Coast (present-day Ghana), Liberia, Libya, and Sudan.  The leading contributors to the Bandung Conference were the nations of Burma, India, Indonesia, Pakistan, and Sri Lanka.  The primary organizer was Ruslan Abdulgani, former Prime Minister of Indonesia.

The conference came during the midst of decolonization and against a backdrop of a world increasingly divided between the Western democracies and the Communist nations.  Conference delegates vowed to take a middle ground in the ongoing Cold War.  They also pledged support for those nations still colonized by the Western states, especially the nations of Africa.  The delegates discussed and agreed upon economic alliances, respect for human rights in their countries, and emphasized peace between Africa and Asia. The Africa and Asia nations also pledged to mutually support their economic development, vowing to rely on themselves instead of Western foreign aid.

Conference delegates adopted a 10-point program that called for, among other things, settlement of all international disputes by peaceful means, respect for the sovereignty and territorial integrity of all nations, and recognition of the equality of all races and the equality of all nations large and small.  The program also called for non-intervention in the internal affairs of other nations and repudiated acts or threats of force against other nations.

Many western powers, including especially the United States, were wary of the alliance between Africa and Asia.  The United States feared that the nations of Asia and Africa, many of them who had just received their independence from colonization, would become infatuated with the leftist ideology.  However, their worries proved unfounded as the members of the Bandung Conference, for the most part, stuck to their vow to chart a middle course between the Western democracies and the Communist nations.