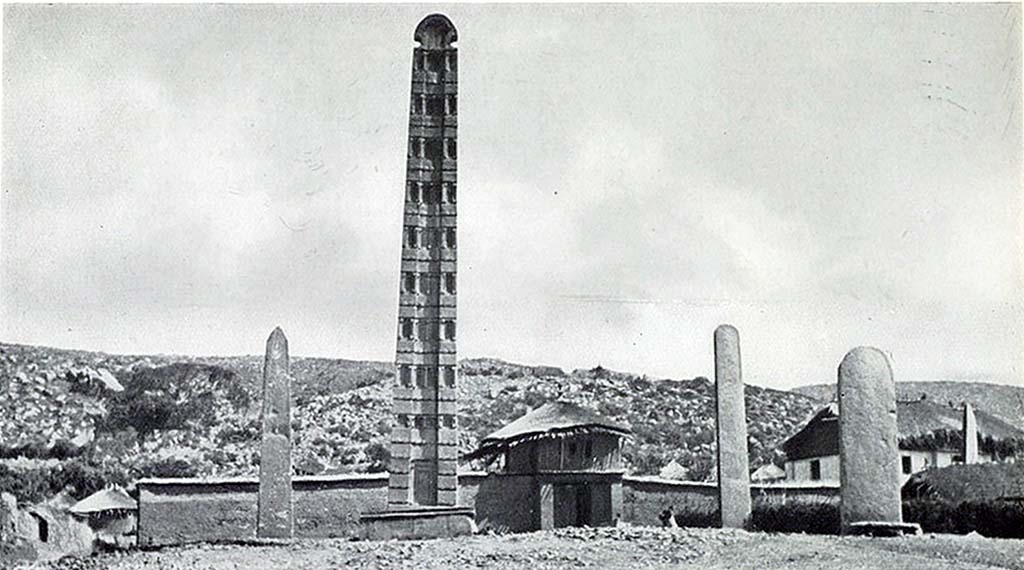 Located in the northeast region of contemporary Ethiopia, the city of Axum sits on a high plateau next to the Red Sea. With the city’s ascendance centuries before the birth of Christ and its position next to the Red Sea, Axum became a major center for international trade. Known for its monumental obelisk and as an early center of Christianity in Africa, Axum became one of the holiest of cities of the Ethiopian Orthodox Church.

Despite Axum’s current state of poverty, it was once a city distinguished by prestigious power. The ancient civilization whose roots date back to 100 B.C.E. was once wealthy from the trading of ivory, exotic animal skins, and gold with other countries. Axum’s political rulers used its newly found power, gained from trading, to build a centralized state that tightly controlled its people.

By the third century A.D. Axum had established its own currency. It began its manufacturing of coins, the first city in Africa to do so, by using its depiction of leaders and the cross of Christianity as a representation of its holy stature. In 320 A.D. Ezana became the King of Axum. Under his rule, Ezana embraced Christianity in 327 A.D. and made it the dominant religion of Axum.  Ezana made the cross the official symbol of his conversion. In 340 A.D. the Christian Cathedral of St. Mary of Zion was constructed in the city. Axum became the first state in Africa to adopt Christianity as its official faith and at the time was among only a handful of Christian states in the world.  Roman Emperor Constantine embraced the faith in 312 A.D. Other small Christian states were scattered around the eastern Mediterranean region.

Along with the faith and the new currency came the establishment of a new language, Geez. It became the official language of Axum and included a written script. The usage of Geez today has declined.  It is now utilized exclusively by the religious leaders of the Ethiopian Orthodox Church.

Axum began to experience a decline during the seventh century with the rise of Islam which spread west from the Arabian Peninsula.  As northeastern African states converted to Islam they reorganzied the traditional Red Sea trading routes which resulted in the exclusion of Christian Axum from regional trade and also cutting it off from the rest of the Christian world. The Christian kingdom of Axum maintained its religious hegemony by denying the Axumite Muslims the right to build mosques in the city. Nonetheless over the next 14 centuries Axumite Christians and Axumite Muslims resided together under various Ethiopian rulers who proclaimed loyalty to the city’s Orthodox Christian roots.

Throughout its reign Axum’s political leaders built monuments, the most important of which was the obelisk of Axum constructed by Ezana to pay tribute to the kingdom’s new faith.  The obelisk was stolen by the Italian army in 1937 during its occupation of Ethiopia. On April 25, 2005 the obelisk was finally returned to Axum after nearly seven decades and was restored to its original pedastal.