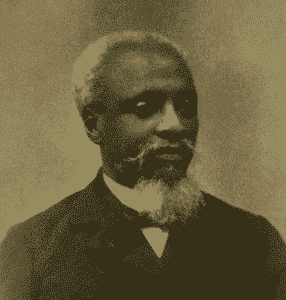 Joseph Auguste Anténor Firmin was a Haitian scholar, politician and civil servant who is best known for his anthropological text published in 1885, De l’égalité des races Humaines (On the Equality of Human Races). Born in Cap-Haitien to a working-class family on October 18, 1850, Firmin was a precocious child whose formal education was entirely in Haiti and included classical European literature and languages as well as anthropological studies. In 1867, he graduated from one of Haiti’s most premiere secondary schools, the Lycée National du Cap-Haitien, and then completed law school at the Université d’État d’Haïti (UEH), passed the bar exam, and become a licensed lawyer by 1875.

Impacted by participating in the revolt against President Guillaume Fabre Nicolas Geffrard in 1867 and the politics of the Parti Liberal, in 1878, Firmin founded the newspaper Le Messager du Nord, which became associated with that political party and in 1879, led an unsuccessful campaign as a Parti Liberal candidate for parliament. Despite his electoral loss, Firmin held political positions in the Haitian government including, Inspector of Schools in Cap-Haitien, Commissaire of the Republic of Haiti (ambassador) in Caracas, Venezuela, and Minister of Finance, Commerce and Foreign Relations in the administration of Haitian President Florvil Hyppolite. In 1883, Firmin was appointed as the Haitian Ambassador to France, and in 1884 he was admitted to the Societé d’Anthropologie de Paris.

While at the Societé d’Anthropologie de Paris, Firmin wrote De l’égalité des races Humaines as a response to the essay of anthropologist Arthur de Gobineau, Essai sur l’inégalité des races Humaines, (Essay on the Inequality of the Human Races). Though Firmin was not anthropologist by training, his essay challenged the reductionist, biological approach to study of humankind that reigned during his day, and argued for a ‘Positivist Anthropology,’ or anthropology that considered geographical and historical contexts. Though this work is seen as rebuttal to Gobineau, Firmin was more broadly critiquing 19th century intellectual practices regarding race.

In 1888, Firmin returned to Haiti and 1891 as the Minster of Foreign Affairs, together with Frederick Douglass staved off U.S. claims to the Môle-Saint-Nicolas region of Haiti. Seen as a threat to the government in Haiti because of his political activism, Firmin was appointed as Minister to Paris, before briefly returning in 1902 as the head of an unsuccessful Firminist revolt that looked to make substantial reforms to Haiti’s institutional and financial infrastructure. Firmin was exiled to St. Thomas in the U.S. Virgin Islands, where he continued his work in Caribbean issues more broadly, before a second and final Firminist revolt took place in Haiti. Firmin set out for Haiti to again lead the revolt, but it was crushed, and he was forced to return to St. Thomas, where he died only a few weeks later on September 19, 1911, at the age of 61.