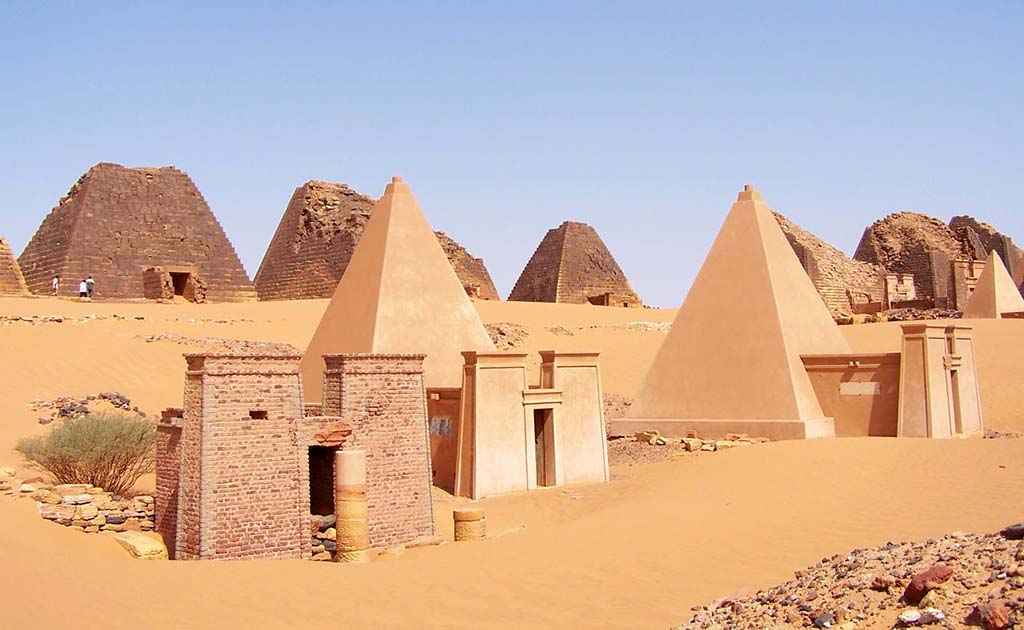 The Kingdom of Kush with its three major cities of Meroe, Kerma, and Napata, emerged in the Nubian Desert south of Egypt along the Upper Nile River Valley from the 2nd millennium B.C. to the fourth century A.D.  Archaeology, architecture, art, and burials provide the most information about the Kushite Kingdom.  While the Kushites had a written language based on the Egyptian hieroglyphics, scholars have only begun to decipher the language and the existing texts.

The location of the kingdom along the Nile River provided strategic communication and trade routes both within the kingdom and throughout northeastern Africa.  Kushites also farmed the Nile River valley, relying on irrigation systems and rainfall in some areas.   The Kushites also mined minerals and high-quality stone for trade and introduced and developed iron metallurgy to the region.  This region of Africa also produced more gold than anywhere in the world at that time. An archeological site near the present-day village of Hosh el-Guruf in Sudan, dating to the early Kush period (1700-1500 B.C.), revealed a massive gold-processing operation with many grindstones, three feet in diameter and several hundred pounds in weight, essential for the mining of gold.

The economy of the ancient Kushites relied, to some degree, on the trade of exotic African goods with Egypt.  As middlemen, Kushite traders passed along ivory, ebony, incense, and other exotic goods from the South to the Egyptians who then traded with other Mediterranean peoples.  The city of Kerma, with its strategic location on the Nile River, controlled the trade route between the lands farther south of Kush and Egypt in the north.  The role of Kush as a trade middleman influenced the relationship between Egypt and Kush.  Egypt actively sought to expand their empire as well as control the trade routes significant to their economy. 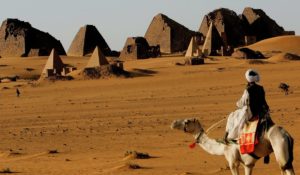 The art and architecture of the Kushites reveal a sophisticated society of innovative craftsmen as well as constant assimilation of new artistic techniques from other lands.  Notable architecture includes stone temple complexes such as the Lion Temple at Naqa, and the steep-sided, solid pyramids found at Meroe and Jebel Barkal.  Kushite art includes narrative tomb wall paintings as well as unique, eggshell-thin pottery with geometric patterns, traded all over the Mediterranean.  Stoic granite and bronze statues of gods and kings convey the Kushite religious beliefs.

Kush collapsed finally in the fourth century A.D. under the persistent attack of nomads from the south and the eastern lands. Also, the emerging Axum Kingdom in Ethiopia eclipsed the Kush Kingdom and contributed to its demise.