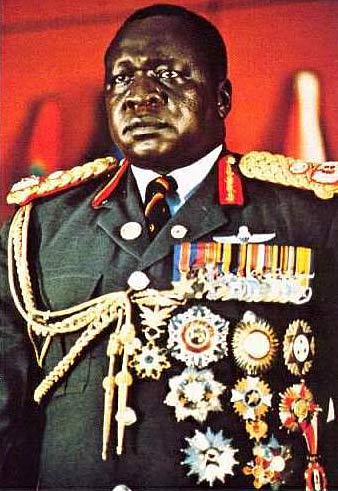 Idi Amin was the Ugandan military dictator and President from 1971 to 1979.  During his reign Amin’s military forces are estimated to have killed 500,000 people and exiled roughly 70,000 non-Ugandan nationals (mostly Indians) from Uganda.

Idi Amin Dada was born in 1925 in the Koboko district of Northern Uganda.  His father, Amin Dada of the Kakwa ethnic group and his mother, Assa Aatte of the Lugbara group, separated at his birth.  Soon after his birth Amin and his mother settled in Lugazi, Uganda near Lake Victoria where he was raised as a Muslim.  Amin did not attend school and in 1946 at the age of 21, he joined the King’s African Rifles as a cook’s assistant.  Because of his size and willingness to use brute force, Amin was promoted within the British military.  At the time of Ugandan independence on 9 October 1962, Amin was one of only two non-British officers in the King’s African Rifles which became the Ugandan Army.

Under the new Ugandan government, headed by Milton Obote first as Prime Minister then as President, Amin quickly rose from Captain at the time of independence in 1962 to Colonel and Commander of the Army in 1965.  In this position Amin was able to recruit and promote people who would be loyal to him; this combined with Obote’s increasing dictatorial control and growing unpopularity with the Ugandan people, ensured that when Amin seized control of the country he would have virtually limitless powers as leader in Uganda and that he would initially be seen as a popular liberator.

On January 25, 1971 the Ugandan Armed Forces took over control of Uganda while President Obote was out of the country.  Amin was quickly asked by loyal military commanders to assume supreme command.  He did so, declaring himself Commander-in-Chief.  Amin further consolidated power through a series of political killings and exiles of potential opponents including those still loyal to Obote.   He then embarked on a much larger campaign of intimidation of almost all of Uganda’s more than forty ethnic groups.  During Amin’s eight years in power there were many failed coup attempts and assassination plots.  Most notable was Obote’s attempt on September 17, 1972 to attack Uganda from his exile in Tanzania with 1,000 troops.  Amin quickly crushed this attempt.

In response Amin launched a reign of terror.  In a nation with an estimated 10 million people in 1970, nearly 500,000 died at the hands of Amin’s police and army during his rule.  Also during Amin’s reign Uganda, previously one of the most vibrant agriculture economies in Africa, fell into a deep economic slump.  Thousands of Ugandan people starved when Amin expelled most of the Indian community, eliminating many who were crucial to the business economy and who had often been the employers in the agricultural sector.

Idi Amin Dada died on 16 August 2003 still in exile in Saudi Arabia.  He never returned to Uganda to answer for the crimes he committed while in power.