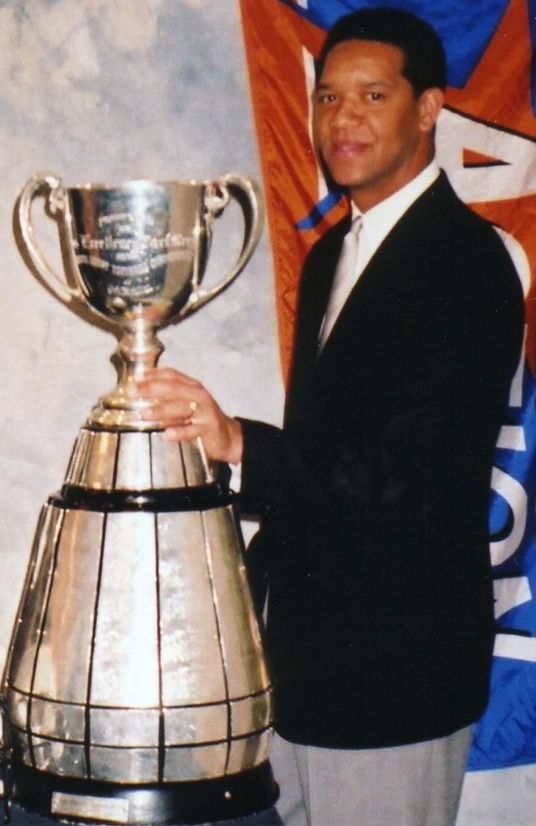 Damon Allen is a professional football player in the Canadian Football League (CFL). In 2007-08 he completed his 24th season with the CFL. A graduate of California State University, Fullerton, Allen is the younger brother of former National Football League (NFL) star Marcus Allen.

Damon Allen played quarterback at Cal State, Fullerton where he set seven single season records in his senior year with the Titans and was named a 1st team Pacific Coast Athletic Association (PCAA) All-star in 1984. Allen led the team to two PCAA championships and broke a 26-year old National Collegiate Athletic Association (NCAA) record with only three interceptions in over three hundred attempts.

Damon Allen began his CFL career in 1985 with the Edmonton (Alberta) Eskimos as their quarterback and led them to a Grey Cup (Canada’s Superbowl) victory in 1987, his first of four. Allen earned Grey Cup Most Valuable Player honours in the win.  In 1989 Allen signed with the Ottawa (Ontario) Roughriders. During the 1991 season he rushed for a career high 1,036 yards and eight touchdowns in 18 games.

In 1992 Allen spent one season with the Hamilton Tiger Cats, before being traded back to the Edmonton Eskimos. In 1993, in his second time around with Edmonton, Allen led the Eskimos to victory in the Grey Cup game, his second win and was named Grey Cup Most Valuable player. In 1995 Allen signed as a free agent with the CFL expansion team, the Memphis Mad Dogs, spending his only professional season in the United States.

Allen next spent seven seasons playing for the British Columbia Lions where he won the third Grey Cup of his career.  In 2003, the 39 year-old Allen was traded to the Toronto Argonauts and soon led the team to their fifteenth Grey Cup Championship and his fourth championship.  Allen is the only CFL player to have quarterbacked three separate teams to Grey Cup victories.

Allen lives in Mississauga, Ontario with his wife and three daughters.