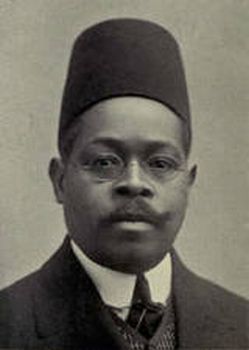 Scholar, playwright, journalist, and African nationalist, Duse Mohamad Ali was born in Alexandria, Egypt on November 24, 1866 to an Egyptian father, Ali Abdul Salam and a Sudanese mother, whose name is unknown. At a very young age Ali was sent to study in England under the tutelage of Captain Duse of the French Army, a classmate who his father had studied alongside at the French Military Academy. In April of 1882, at the age of fifteen, Ali discontinued his studies and returned to Egypt. Soon after his return both his brother and father were killed during the Urabi Uprising and the British Bombardment of Alexandria that took place later that year.   Soon after the death of his father and brother, his family was evacuated to Sudan.

It was then that Ali returned to England to pursue an acting career which would last for twenty-four years. After marrying in 1902, Ali became frustrated with his acting career due to his being type-casted into various stereotypical roles including most often the black slave and the wicked Muslim. Despite these roles Ali was the only English-speaking actor from the Middle East when performing in English theater.

Following his acting career Ali developed an interest in politics and became a freelance journalist. Many of his early articles focused on British policies towards his native Egypt.  Due to illness, he sought warmer climates and began traveling the globe to Bombay (India), Hong Kong (China), the Caribbean, and the United States. His travels further acquainted him with global affairs and between 1909 and 1911 he published several articles that challenge imperialism against Africans and Asians.  Ali published his first book in 1911 titled In the Land of the Pharaohs: A Short History of Egypt From the Fall of Ismail Pasha to the Assassination of Boutros Pasha.

In 1912 Ali launched African Times and Orient Review, the first newspaper in England owned and published by a black person. Through this publication, he developed relationships with a number of black intellectuals, including Booker T. Washington, W.E.B. DuBois, Alain Locke, and Marcus M. Garvey.  He became particularly close to Garvey and joined Garvey’s United Negro Improvement Association (UNIA) where he serving as the foreign secretary and the head of African Affairs.  Ali left the UNIA following Garvey’s 1927 deportation from the United States.

After a number of failed business attempts in the United States and in Europe, Ali relocated to Lagos, Nigeria where he founded The Comet in 1933. The newspaper was soon ranked among the top publications in Nigeria during this time, with a circulation of 4,000.  In 1944 he sold The Comet to Nnamdi Azikiwe’s Zik’s Press Limited. Duse Mohamad Ali died a year later on June 25, 1945 in Lagos, Nigeria.