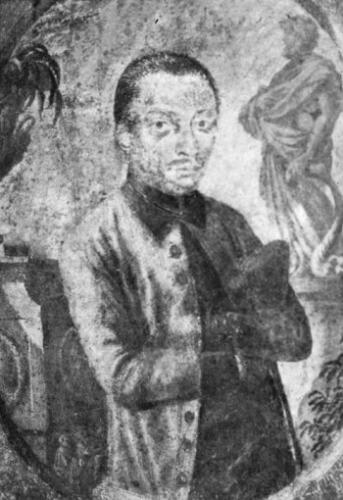 Antônio Francisco Lisboa, the Aleijadinho (the “little cripple”), prominent Brazilian artist, was born in 1738 to a Portuguese architect father, Manoel Francisco Lisboa, and his Brazilian slave, Isabel. He died in 1814, in his native state of Minas Gerais, Brazil, poor and unknown. A foremost representative of the Brazilian Baroque, Aleijadinho worked under severe constraints, as he suffered grave physical deformities due to illness (possibly leprosy or syphilis), requiring that his working tools be tied to his hand. Taught mostly by his father, Aleijadinho left an impressive body of religious art: architectural designs and sculptures in churches, convents, and monasteries.

Aleijadinho lived and worked in the Brazilian state of Minas Gerais. As the name indicated, this was an extremely wealthy mining region, which, at its peak, remitted about 25,000 kilos of gold to Portugal per year. The combination of wealth, the religiosity of its inhabitants, and geographical isolation (Minas is located inland in Brazil and its colonization occurred around two centuries after the coastal area), contributed to the development of a unique sculptural and architectural style, as seen in Aleijadinho’s legacy.

The main body of Aleijadinho’s work concentrated in a few important mining towns of his time: Ouro Preto, São João del Rei, Sabará, and Congonhas. Combining elements of the Gothic and Renaissance into the language of the Baroque, Aleijadinho developed a powerful artistic language – sculpture and architecture blend masterfully in his work. Famous examples of his sculptural work included the life size rendering of 12 prophets, standing on the stairway of Bom Jesus de Matosinhos Church, in the city of Congonhas do Campo. The Churches of San Francis de Assis, in São João Del Rei and in Ouro Preto, well illustrated his abilities as an architect.

Aleijadinho died at 76, poor and forgotten. It was during the 1920s that his art received closer attention, in the context of the Brazilian Modern Art week. He has since been considered a master in his craft and one of the first to contribute to a genuinely Brazilian artistic language.