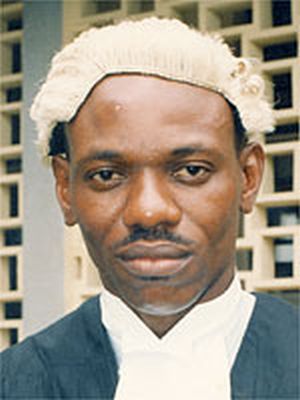 Godwin Ajala is remembered as a U.S. national hero who fought to save the lives of countless people as they escaped from the World Trade Center Towers on September 11, 2001.

He is also the only Nigerian listed among the nearly 3,000 people who died because of the attack.

Ajala was born in Nigeria on June 9, 1968, the son of a retailer from Ihenta, a small town in the eastern Nigerian state of Ebonyi. At the time his region was part of the break-away Biafra which was in rebellion against the central Nigerian government. Ajala came of age long after the Nigerian Civil War ended and Nigeria was reunited. As an adult, Ajala became a lawyer in Nigeria. His family, including his wife, Victoria, and their three children, Onyinyechi, 7, Uchechukwu, 5, and Ugochi, 1, lived in Ihenta. In 1995, Ajala emigrated to the United States to make a better life for himself and his family.

When he first arrived in the U.S Ajala bounced between poorly paid jobs but eventually obtained a steady position as a security guard or Access Control Officer at the New York World Trade Center towers at the Concourse (ground floor) level. In this position, Ajala rode elevators and walked floors of the 110-story tower at Two World Trade Center, helping secure the building and attending to small emergencies.

Ajala worked in this position while preparing to take the New York State Bar Exam with plans to reunite his family in the U.S. once he had passed the exam. Friends described him as working from 6 a.m. to 2 p.m. as a security guard and then coming home to study for another 6 to 8 hours every day.

Despite his efforts, Ajala never achieved his goals of becoming a lawyer in the United States and bringing his family to the U.S. Nor do we know if he would have ever been able to achieve these goals since, having little money, he was unable to attend law school in the U.S., and instead took more affordable specialized prep courses for the New York Bar Exam. He failed the exam three times.

Yet on the day of September 11, 2001, Ajala demonstrated his self-sacrificing character when, instead of running to save his own life, he helped to evacuate thousands of people from a street-level security post inside the lobby of Two World Trade Center when the second plane hit the building. He held the door open for people running out, and repeatedly went back inside to guide more people out of the blazing structure. Exhausted after helping to guide many out of the attacked building, Ajala reportedly first went into a coma and died the following Sunday.

Ajala died at age 33, one of 11 security guards among the nearly 3,000 people who were killed at the World Trade Center.