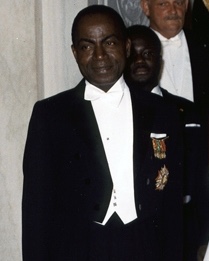 The African Democratic Rally, known as Rassemblement Démocratique Africain (RDA), was the first French-speaking Pan-African organization.  Created in 1946 at Bamako, Sudan (now Mali), it emerged when African nationalist and anti-colonialist movements were growing rapidly at the end of World War II.

In 1945 the French Fourth Republic granted its African colonies the right to send representatives to the French National Assembly in Paris.  As these representatives campaigned to abolish forced labor and colonial rule, they decided to join forces to create a bloc of assembly votes and thus gain greater influence in political debates.  They also sought to create a Pan-African movement across the borders of the various French African colonies.

The RDA objectives included uniting Africans across the continent without consideration of their political inclination, social status, religion, or ethnicity.  The RDA also pledged to fight colonial domination and assimilation. The organization sought to promote the African culture and civilization as an “African organization adapted for African conditions, led by Africans to serve Africa.”  The RDA did not, however, reject union with France. Other ideas were discussed to improve African conditions: increased trade between colonies, the establishment of colleges and universities, the creation of free health care centers, and the freedom to organize labor unions.

Despite the goal of continent-wide African unity, the RDA always remained a French African organization.  All of its members were from French West Africa (AOF) and French Equatorial Africa (AEF) territories.  There were, however, some attempts to work with leaders from the French West Indies. Rather than a single political organization, the RDA was actually a network of local parties that envisioned similar Pan-African ideals. For instance, the Democratic Party of Guinea and the PDCI were local sections of the RDA. The RDA was also strongly connected to the French Communist Party until 1950 and had the support of the French government at various times.

By the early 1960s when many former French African colonies gained independence, political disagreement emerged between the members, weakening the organization and preventing it from maintaining the Pan-Africanist scope envisioned by its founders. Nonetheless, more than sixty years after its founding, the heritage of the RDA is still alive in Africa within the PDCI-RDA in the Ivory Coast and the Sudanese Union (US-RDA) in Mali.