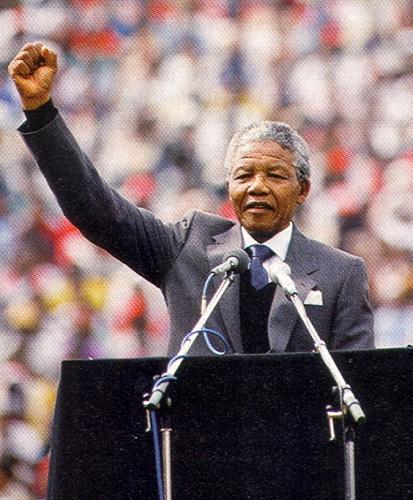 After Nelson Mandela was released from prison in 1990, he and representatives of the African National Congress (ANC) began a public period of negotiations in preparation for majority rule in that nation.  The negotiations were set back however when ANC leader Chris Hani was assassinated.   When many in the country assumed that violence would break out between government supporters and ANC supporters, Mandela on April 13, 1993, gave a speech calling for calm and the continuation of negotiations.  That speech appears below.

Tonight I am reaching out to every single South African, black and white, from the very depths of my being.

A white man, full of prejudice and hate, came to our country and committed a deed so foul that our whole nation now teeters on the brink of disaster.

A white woman, of Afrikaner origin, risked her life so that we may know, and bring to justice, this assassin.

The cold-blooded murder of Chris Hani has sent shock waves throughout the country and the world. Our grief and anger is tearing us apart.

What has happened is a national tragedy that has touched millions of people, across the political and color divide.

Our shared grief and legitimate anger will find expression in nationwide commemorations that coincide with the funeral service.

Tomorrow, in many towns and villages, there will be memorial services to pay homage to one of the greatest revolutionaries this country has ever known.

Every service will open a Memorial Book for Freedom, in which all who want peace and democracy pledge their commitment.

Now is the time for all South Africans to stand together against those who, from any quarter, wish to destroy what Chris Hani gave his life for – the freedom of all of us.

Now is the time for our white compatriots, from whom messages of condolence continue to pour in, to reach out with an understanding of the grievous loss to our nation, to join in the memorial services and the funeral commemorations.

Now is the time for the police to act with sensitivity and restraint, to be real community policemen and women who serve the population as a whole. There must be no further loss of life at this tragic time.

This is a watershed moment for all of us.

Our decisions and actions will determine whether we use our pain, our grief and our outrage to move forward to what is the only lasting solution for our country – an elected government of the people, by the people and for the people.

We must not let the men who worship war, and who lust after blood, precipitate actions that will plunge our country into another Angola.

Chris Hani was a soldier. He believed in iron discipline. He carried out instructions to the letter. He practiced what he preached.

Any lack of discipline is trampling on the values that Chris Hani stood for. Those who commit such acts serve only the interests of the assassins, and desecrate his memory.

When we, as one people, act together decisively, with discipline and determination, nothing can stop us.

Let us honor this soldier for peace in a fitting manner. Let us rededicate ourselves to bringing about the democracy he fought for all his life; democracy that will bring real, tangible changes in the lives of the working people, the poor, the jobless, the landless.

Chris Hani is irreplaceable in the heart of our nation and people.

When he first returned to South Africa after three decades in exile, he said: “I have lived with death most of my life. I want to live in a free South Africa even if I have to lay down my life for it”. The body of Chris Hani will lie in State at the FNB Stadium, Soweto, from 12 noon on Sunday 18 April until the start of the vigil at 6pm. The funeral service will commence at 9am on Monday, 19th April. The cortege will leave for Boksburg Cemetery, where the burial is scheduled for 1pm.

These funeral service and rallies must be conducted with dignity.

We will give disciplined expression to our emotions at our pickets, prayer meetings and gatherings, in our homes, our churches and our schools. We will not be provoked into any rash actions.

We are a nation in mourning.

To the youth of South Africa we have a special message: you have lost a great hero. You have repeatedly shown that your love of freedom is greater than that most precious gift, life itself. But you are the leaders of tomorrow. Your country, your people, your organization need you to act with wisdom. A particular responsibility rests on your shoulders.

We pay tribute to all our people for the courage and restraint they have shown in the face of such extreme provocation. We are sure this same indomitable spirit will carry us through the difficult days ahead.

Chris Hani has made the supreme sacrifice. The greatest tribute we can pay to his life’s work is to ensure we win that freedom for all our people.

BlackPast, B. (2009, January 26) (1993) Nelson Mandela, “Address to the Nation”. Retrieved from https://www.blackpast.org/global-african-history/1993-nelson-mandela-address-nation/