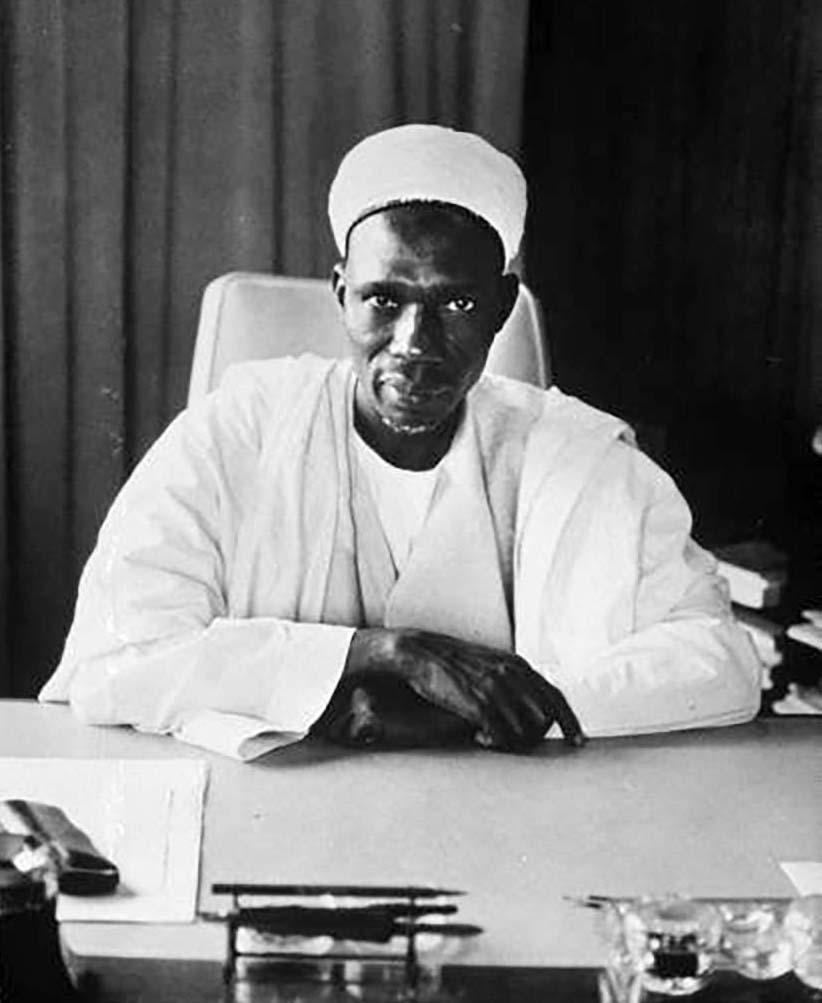 In 1957 the Nigerian House of Representatives passed a motion requesting Independence from Great Britain and calling on that colonial power to officially set the date for that Independence as October 1, 1960.  After the motion was passed, Alhaji Abubakar Balewa, a member of the House who would soon be named Nigeria’s first prime minister, gave a speech celebrating the nation’s march toward independence.  That speech appears below.

This is a great day for Nigeria. It marks the beginning of the last stage of our march toward independence and all of us who are here today should be thankful to Almighty God who has given us the opportunity to witness the events of this most memorable time.

The next three years will see the culmination of a process which has been gathering momentum year by year ever since a part of what is now Nigeria first became a British colony, ninety-six years ago. Many things have happened between 1861, the year of the annexation of Lagos, and 1957, the year in which two regions in the Federation have been granted self-government and in which the independence of the Federation itself looms large upon the horizon. We have traveled a long way and we can congratulate ourselves that after thirty-four years of being associated with what I may loosely call a form of parliamentary government, we, the people of Nigeria, have reached the stages we have today. The old Nigeria Council which was established in 1923, and which survived up to 1951, though under the new name of Legislative Council, could well be regarded as the foundation of this, our House of Representatives. We should therefore express our thanks to those eminent Nigerians, dead and living, who played so great a part in that Council and who thereby made possible the important political advance which we are witnessing today.

It was in 1952 that Nigerians were appointed Ministers and so for the first time in history, Nigerian politicians became directly associated with the formulation of government policy. Then in 1954, as a result of the constitutional discussions of 1953, Nigerian Ministers were charged with both collective and individual responsibilities over departments and other government bodies. But to me the most important result of the constitutional changes in 1954 was the introduction of a federal form of government for Nigeria—a system which I had advocated as far back as 1948 in the old Legislative Council. I am pleased to see that we are now all agreed that the federal system is, under present conditions, the only sure basis on which Nigeria can remain united. We must recognize our diversity and the peculiar conditions under which the different tribal communities live in this country. To us in Nigeria therefore unity in diversity is a source of great strength, and we must do all in our power to see that this federal system of government is strengthened and maintained.

Because of my firm belief in the need for national unity, I decided that the country ought to have a National Government so that the three major political parties, the NCNC, the Action Group, and the NPC, could be closely associated with the making of policy and planning in preparation for 1960. I regard the period between now and 1960 as one of national emergency—a period in which we should bury our political differences and work together as a team so that our ambition to achieve independence may be realized. In all this I must express my gratitude to Dr. Azikiwe, to Chief Awolowo, to Dr. Endeley, and to the leader of my own party, the Sardauna of Sokoto, for their cooperation and support for my decision. At first we shall still need financial and technical assistance, and we trust that our friends abroad and in the Commonwealth will not fail us here; but in the future we ourselves must work to create a balanced and, as far as is humanly possible, a self-sufficient economy.

Nigeria’s economy has been closely linked with that of the United Kingdom, and we intend to strengthen that link to the advantage of both countries. After independence, we shall continue to look first to Britain to supply those technical officers whose services we need so much.

I must return to my main theme. The future of this vast country of Nigeria must depend in the main on the efforts of ourselves to help ourselves. This we cannot do if we are not working together in unity. Indeed unity today is our greatest concern and it is the duty of everyone of us to work to strengthen it. Bitterness due to political differences will carry Nigeria nowhere and I appeal to all political leaders throughout the country to try to control their party extremists. Nigeria is large enough to accommodate us all in spite of our political differences.