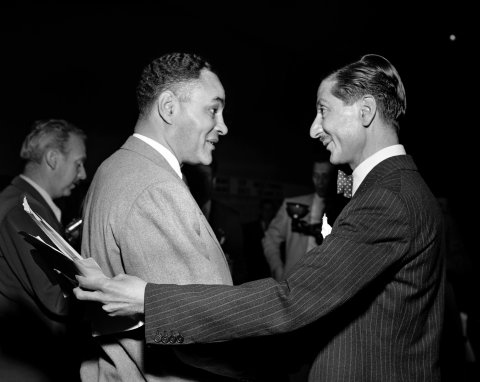 In 1950 Ralph Bunche, a political scientist by training and then an official of the United Nations, became the first African American to win the Nobel Peace Prize.  His brief acceptance address delivered on December 10, 1950 in Oslo, Norway appears below.

Your Majesty, Your Royal Highnesses, Mr. President of the Nobel Committee, Ladies and Gentlemen,

To be honored by one’s fellow men is a rich and pleasant experience. But to receive the uniquely high honor here bestowed today, because of the world view of Alfred Nobel long ago, is an overwhelming experience. To the President and members of the Nobel Committee I may say of their action, which at this hour finds its culmination, only that I am appreciative beyond the puny power of words to convey. I am inspired by your confidence.

I am not unaware, of course, of the special and broad significance of this award – far transcending its importance or significance to me as an individual – in an imperfect and restive World in which inequalities among peoples, racial and religious bigotries, prejudices and taboos are endemic and stubbornly persistent. From this northern land has come a vibrant note of hope and inspiration for vast millions of people whose bitter experience has impressed upon them that color and inequality are inexorably concomitant.

There are many who figuratively stand beside me today and who are also honored here. I am but one of many cogs in the United Nations, the greatest peace organization ever dedicated to the salvation of mankind’s future on earth. It is, indeed, itself an honor to be enabled to practice the arts of peace under the aegis of the United Nations.

As I now stand before you, I cannot help but reflect on the never-failing support and encouragement afforded me, during my difficult assignment in the Near East, by Trygve Lie:, and by his Executive Assistant, Andrew Cordier. Nor can I forget any of the more than 700 valiant men and women of the United Nations Palestine Mission who loyally served with Count Bernadotte and me, who were devoted servants of the cause of peace, and without whose tireless and fearless assistance our mission must surely have failed. At this moment, too, I recall, all too vividly and sorrowfully, that ten members of that mission gave their lives in the noble cause of peace-making.

But above all, there was my treasured friend and former chief, Count Folke Bernadotte, who made the supreme sacrifice to the end that Arabs and Jews should be returned to the ways of peace. Scandinavia, and the peace loving world at large, may long revere his memory, as I shall do, as shall all of those who participated in the Palestine peace effort under his inspiring command.

In a dark and perilous hour of human history, when the future of all mankind hangs fatefully in the balance, it is of special symbolic significance that in Norway, this traditionally peace-loving nation, and among such friendly and kindly people of great good-will, this ceremony should be held for the exclusive purpose of paying high tribute to the sacred cause of peace on earth, good-will among men.

May there be freedom, equality and brotherhood among all men. May there be morality in the relations among nations. May there be, in our time, at long last, a world at peace in which we, the people, may for once begin to make full use of the great good that is in us.