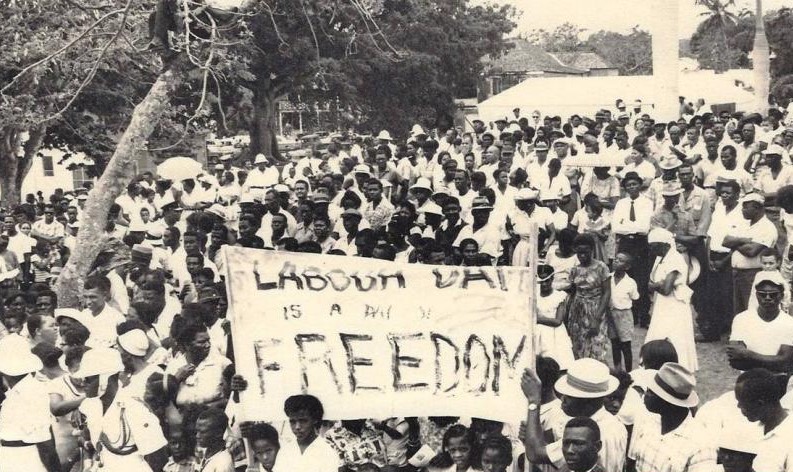 In 1942, during World War II, British military officials authorized the construction of two military air bases in the then British colony of the Bahamas. The main base would be located outside of Nassau, the colonial capital, near the airport and the other at the western end of the island of New Providence at a site called Satellite Field.

When construction began on what was locally known as “The Project,” British colonial officials announced that over 2,000 Bahamians would be employed to construct the bases. A local contractor, The Pleasantville Construction Company, was assigned to the project. It originally proposed to pay Bahamian workers eight shillings per day, the equivalent of two U.S. dollars. Local colonial officials objected and convinced the company to pay four shillings per day. Meanwhile white American workers who were imported to help build the bases were promised eight shillings.

When the local workers heard that the Americans were being paid more for the same work, they protested. When requests sent by the Bahamas Federation of Labor to the Colonial government for a pay increase were denied, workers decided to hold a protest demonstration. On June 1, 1942, thousands of Bahamian workers came to Bay Street via Burma Road in a march of solidarity. The men marched from the overwhelmingly black over-the-hill neighborhood into the Public Square in front of government offices. British Colonial Attorney General Eric Hallinan came outside to address the workers from the steps of the Colonial Secretary’s office, hoping to calm the crowd. Instead, his words turned the demonstration into a riot.

The workers headed down Bay Street in a furor, smashing windows of businesses and looting as they went along. For two days the riots ensued, and the city of Nassau was in a state of emergency. Five black Bahamian workers were killed during the riots and over thirty white men were injured. One hundred and fourteen workers were arrested for their roles in the riots and soon the local jails were filled with inmates. The Nassau jail had to stagger entry dates for the convicted to avoid overcrowding. Many of the protesters were sentenced to hard labor and some would spend almost a decade in prison for their participation in the riot. Some colonial officials promoted unsubstantiated rumors that the riot was promoted by fifth columnists in the Bahamas working in support of Nazi Germany.

In response to the protests and riot, the government offered the workers a one shilling per day increase and a free meal at lunch. This action quelled the riot as more than half of the workers returned to work by June 4th. The unintended upshot of the Burma Road Riot was the rise of the Peoples Labor Party in the Bahamas, later led by Randol Fawkes. The Peoples Labor Party organized commemorative marches to remember the Burma Road Riot. As importantly, they joined with a growing number of political activists to demand independence from Great Britain. That independence finally came thirty- one years later on July 10, 1973.