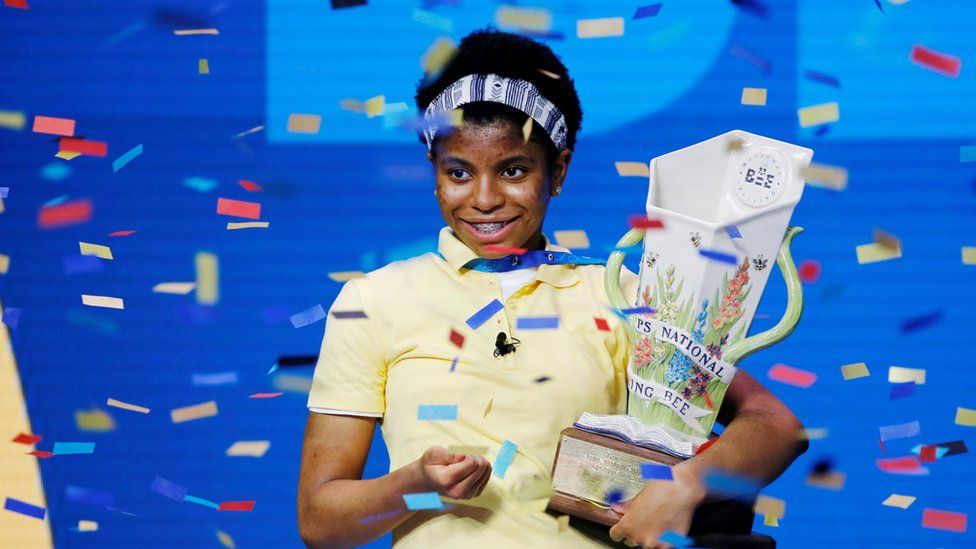 Who are they:
Zaila Avant-garde is the 2021 Scripps National Spelling Bee Champion and a Guinness Book World Record holder.

Why are they important to know about:
On July 8, 2021, at 14 years old, Zaila Avant-garde became the first African American to win the Scripps National Spelling Bee in the 96-year history of the competition.

Details of the life of the person:
Zaila Avant-garde was born in 2007, in Harvey, Louisiana, to Alma Heard and Jawara Spacetime. Her father gave her the last name Avant-garde as a tribute to his favorite album by musician John Coltrane. Avant-garde and her three brothers are homeschooled by their parents. She began to practice dribbling a basketball when she was five and decided she wanted to achieve a World Record when she got a Guinness Book for her eighth birthday.

In the 2019 Scripps National Spelling Bee, she tied for 370th place out of 600. She also participated in the 2020 Kaplan University Online Spelling Bee, and after six days, eighteen hours, and thirty-one rounds, with over five hundred and four words, Zaila won her first professional championship.

On July 8, 2021, Zaila Avant-garde became the first African American to win the Scripps National Spelling Bee in the 96-year history of the event. The win comes with a trophy and over $50,000 in cash and prizes. Avant-garde won the championship with the word “murraya”—defined as a type of tropical plant. The only previous black person to win the spelling bee was 12-year-old Jody-Anne Maxwell of Jamaica in 1998.

When she grows up, Avant-garde wants to be an archaeologist, a WNBA player, and to work with NASA.

Their lasting impact:
At such a young age, Zaila Avant-garde’s talents have allowed her to make history in different avenues. The fact that she was the first African American person to win the Scripps National Spelling Bee Championship will inspire many kids for generations to come.

What we learned from them:
If you keep working hard and practicing whatever you’re passionate about, it’s possible to become the best at it, receive recognition, and inspire others. Zaila Avant-garde shows us that you also don’t have to stick to one talent. If you’ve got skills or interest in multiple areas, you can keep training hard at all of them to become better and better.