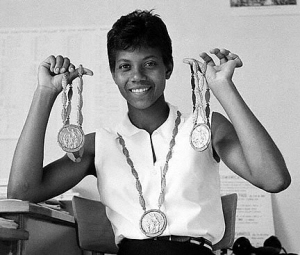 Wilma Rudolph with her Olympic Gold Medals
Fair use image

Who are They?
Wilma Rudolph was an Olympic runner who competed in the 1956 and 1960 Olympics in Melbourne, Australia and Rome, Italy.

Why are they important to know about?
In the 1960 Olympics in Rome, Wilma Rudolph became the first American woman to win three gold medals.

Details of the person’s life:
Wilma Rudolph was smaller than most babies when she was born on June 23, 1940, in St. Bethlehem, Tennessee, one of eight children, to Blanche and Ed Rudolph. She weighed only four-and-a-half pounds at birth. As a little girl, she was sick a lot: she had double pneumonia twice, and scarlet fever. Then she got polio which paralyzed her left leg. For the next two years, her mother brought her to Meharry Medical College in Nashville every week for special treatments. Wilma noticed that when they rode the bus, all the African Americans had to sit in the back, because of the segregation laws.

At home, Wilma’s family helped her by massaging her leg four times a day, but she still needed a metal brace on it from ages five to nine.

When she was seven, Wilma started school at Cobb Elementary in Clarksville Tennessee. During her years there, she discovered she loved sports. Her favorite was basketball, but in eighth grade she joined the track team and competed in five different events. By the time she was 16, she had won a bronze medal in the 1956 Olympics in Melbourne, Australia.

In 1958, Wilma started college at Tennessee State University, planning to become a teacher. But she kept training. She went to the 1960 Olympics in Rome, Italy and won gold medals in the 100-meter dash, 200-meter dash and the 4 x 100 meter relay. She also set world records in all three events.

On May 27, 1963, Wilma graduated from Tennessee State and was offered a job as a teacher and girls’ track coach at her old school, Cobb Elementary.

Their lasting impact:
Wilma Rudolph’s grit and determination inspired generations of women athletes. In 1994, she was inducted into the Women’s Sports Hall of Fame.

What have we learned from this person?
“Impossible” things may only seem impossible! With the help of her family, Wilma Rudolph persevered, even with a paralyzed leg. She worked hard at what she loved doing, and the “impossible” became possible. “My doctor told me I would never walk again,” she wrote in her autobiography. “My mother told me I would. I believed my mother.”