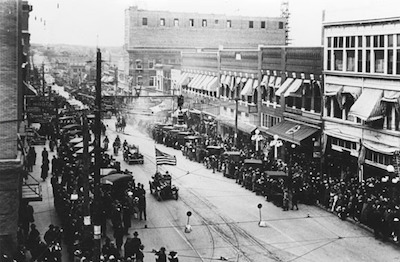 Black Wall Street became one of the wealthiest black communities in America. Greenwood was a neighborhood in Tulsa, Oklahoma. In the early 1900s, Booker T. Washington visited Greenwood. He saw it was a successful town and called it “Negro Wall Street.” It is now called “Black Wall Street.”

Why it is important to know about:

Black Wall Street was on the Arkansas River in Tulsa, Oklahoma. It was a fast-growing town. Railroad tracks separated where people lived. Whites lived in southern Tulsa. Blacks lived in northern Tulsa. Blacks could work for white people in Tulsa. But they could not shop in the white neighborhoods. Black people set up their own neighborhood around Greenwood Street. Many people came for jobs when oil was discovered. Tulsa had tall office buildings and electric trolley cars. The city had four railroads, telephone service, and an airport by 1921. Many rich black people settled in Black Wall Street. There were beautiful homes. Black Wall Street had over two hundred black businesses. Black Wall Street had newspapers, schools, and theaters. It had restaurants and hotels. It had pharmacies, parks, and churches. It also had grocery stores and a library. The people of Black Wall Street did not need anything outside their town. They had their own doctors, lawyers, and teachers. They had their own dentists and entertainers. Black Wall Street was a symbol of success. It was one of the wealthiest black towns in America for fifteen years. In 1921, a group of angry white men burned the town to the ground. This is known as the Tulsa Race Riot. Recently, people are learning more about this event and why it happened.

Wall Street is an eight-block-long area in New York City. It is where banks are located and lots of money is traded. The name “Black Wall Street” meant that it was a wealthy town. Black Wall Street became a symbol of black accomplishment.

There is power in believing in yourself. Uniting together and supporting your own race uplifts people. Looking out for others gives them a chance to succeed.