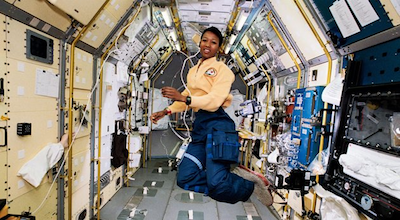 Mae Jemison became the first African American woman in space during her flight on the STS-47, Spacelab-J in September of 1992.

Jemison’s commitment to learning has taken her far, both on planet Earth and beyond. She graduated from prestigious universities with multiple degrees and went on to get jobs in careers that she loved while also continuing to give back to communities in need.

Details of the life of the person:
Mae C. Jemison was born on October 17, 1956, in Decatur, Alabama. At the age of three, her family moved to Chicago, Illinois to further their educational opportunities.  Her parents stressed the importance of education and when she was four, her uncle sparked her interest in archaeology and anthropology.  She spent much of her time in libraries reading about all she could get her hands on. Mae graduated high school at 16 with honors and entered Stanford University where she graduated in 1977 with a degree in chemical engineering and a second  degree in African American studies.

Jemison went on to attend Cornell University’s medical school and graduated in 1981. At Cornell, she conducted a study in Cuba and volunteered in a Thai refugee camp. She also took part in health studies in Kenya. From 1983 to 1985 she was the area Peace Corps medical officer for Sierra Leone and Liberia in West Africa.  She was also part of various research projects for the vaccines for hepatitis B and rabies.

In 1987 she joined the National Aeronautics and Space Administration (NASA) program and completed a one-year training program in 1988.  Before her first flight in space, she worked at the Kennedy Space Center as a mission specialist.  In September of 1992, Mae Jemison became the first Black woman in space on flight STS-47, Spacelab-J.  During this journey, she completed 190 hours, 30 minutes and 23 seconds in space.  She resigned from NASA in 1993.

In 1994, she founded and ran The Earth We Share, a space camp for students.  From 1995-2002 she taught environmental studies at Dartmouth College.  Mae Jemison is currently the director of the Jemison Institute for Advancing Technology in developing countries.

Their lasting impact:
Mae Jamison made history as the first Black woman to travel into space. She is also an accomplished engineer, physician and humanitarian. Her impressive achievements show that truly, not even the sky is the limit.

What we learned from them:
Being committed to growing, to learning, to giving back is part of what makes a life well lived. Mae Jemison shows us that it is important to continue to acquire new knowledge but also that we should try to use that knowledge to make our world, and even our galaxy, a better place.