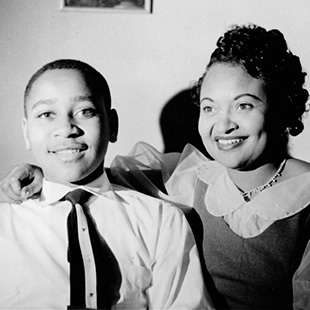 Emmett Till and mother, Mamie Till-Mobley, 1954
Fair use image

Who are they:
Emmett Till was born on July 25, 1941 in Chicago, Illinois. His parent’s names were Louis and Mamie Till. He was an only child, and he attended Mccosh Elementary School on the south side of Chicago. When he was 14 years old, he took a trip to visit family in Mississippi. While there, he was killed by two white men and his death became an example of how Black people were still being mistreated in the South.

Why are they important to know about:
During this time period, the South was a dangerous place for Black people. They received little to no respect and Jim Crow laws aided in that unfair treatment. Emmett Till’s death was so cruel that it gained the attention of the entire nation and became a driving force behind the growing Civil Rights Movement, which promoted the need for change.

Details of the event:
On August 28, 1955, 14 year-old Emmett Till was killed while visiting family members in Money, Mississippi. Since he was from Chicago, Till was not aware of how the South treated black people, as racism, although it existed in the North, was not as obvious. The two white men responsible for his death were Roy Bryant and J.W. Milam; they were not charged because during this time in the South the legal system valued whites over Blacks. Four months after the trial though, the truth came out when Bryant and Milam did an interview with Look magazine for $4,000 and stated that they killed young Emmett Till. They said their reason for the act was Bryant’s wife Carolyn, a clerk at the local store, accused Till of flirting with her while he was buying bubble gum. A few days later he was kidnapped, beaten, tied with barbed wire, shot in the head, and one of his eyes was removed. His body was then thrown into the Tallahatchie River. The crime was so brutal it gained national and international attention. Till’s funeral was attended by more than 50,000 people, and his mother openly displayed his body in the casket saying, “I wanted the world to see what they did to my son.”

Lasting impact:
This lack of justice became a major point of action in the Civil Rights Movement. The National Association for the Advancement of Colored People (NAACP), along with many national newspapers, and Jet magazine, used the images of Till’s broken body to show the world that it was time for a change in the way Black people were treated in the South. Emmett Till was one of the reasons Rosa Parks refused to give up her seat, an act which sparked the Montgomery Bus Boycott.

What we learned from this event:
Gaining civil rights as Black people was not only important in making sure we received equality and fair treatment, but our lives also depended on it.