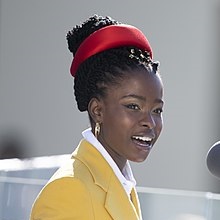 Who are they:
Amanda S. C. Gorman is a poet and activist. In 2017 she became the first person to be named National Youth Poet Laureate. In 2021 at the Presidential Inauguration of President Joe Biden, she read her poem “The Hill We Climb.”

Why are they important to know about:
Amanda Gorman uses her poetry to highlight important issues around social justice. Her words inspired countless people around the U.S. She has traveled the world and received lots of honors because of her activism and talent for poetry.

Details of the life of the person:
Amanda S. C. Gorman was born with a speech and auditory impediment on March 7, 1998, in Los Angeles, California. She and her two siblings were raised by their single mother, a sixth grade English Teacher. She began writing poetry at a very young age and was an avid reader.

Gorman became a youth delegate for the United Nations in 2013 and was chosen as the first youth poet laureate of Los Angeles in 2014. At17 years old, she published her first book, The One for Whom Food Is Not Enough, in 2015. After high school, she attended Harvard University.

In 2017 Gorman became the first person to be named National Youth Poet Laureate. Later that year she also became the first youth poet to open the literary season for the Library of Congress. Later in the year, Gorman introduced Hillary Clinton at the Vital Voices Global Leadership Awards and won a $10,000 grant. She was selected as one of Glamour magazine’s “College Women of The Year” in 2018, and was chosen as one of The Root magazine’s “Young Futurists” in 2019.

In May 2020 she graduated from Harvard University with a BA in Sociology. Future First Lady Jill Biden invited Gorman to read her poem “The Hill We Climb” at the 2021 Presidential Inauguration of her husband, President Joe Biden. Gorman was also featured on the February 2021 cover of Time magazine. That month, Gorman read a poem at Superbowl LV, making her the first poet to do so during the pregame ceremony. She recently released books, The Hill We Climb: Poems, (2021) and Change Sings: A Children’s Anthem, (2021) which were immediate bestsellers. She has said she wants to run for President in 2036.

Their lasting impact:
Amanda Gorman’s Inauguration poem “The Hill We Climb” inspired countless viewers to reconsider the power of poetry.

What we learned from them:
Poetry has the power to change the world. Amanda Gorman shows that we can use poetry, and storytelling to encourage our family, friends, politicians and anybody else to have more empathy and love for our fellow human beings. Her work shows that often times, words can and do inspire meaningful action.