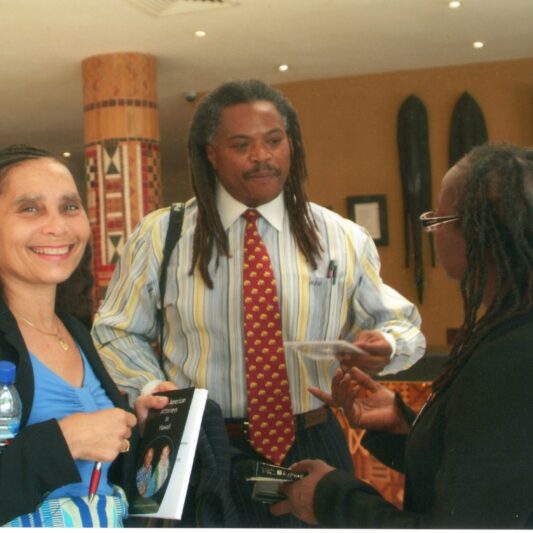 Andre’ S. Wooten has unique experience studying and teaching U.S. Constitutional history and African-American History and traveling to many parts of the world communicating with varieties of people.

After obtaining a B.A. in world history at Reed College in 1971, and graduating from the University of Washington Law School in 1975, Atty. Wooten went to work for KCTS Channel 9 TV, the Educational Public television station in Seattle, where he shot documentaries and community affairs news programs.

Andre’ Wooten began practicing law as a deputy Corporation Counsel for the City of Seattle in from 1976-1980; and taught African-American History and Constitutional Law, for the University of Washington Black Studies Department from 1978-1980. He made his first trip to West Africa then visiting Cameroon, Nigeria, Ivory Coast and Senegal. In 1978 my daughter Alexis Kira Wooten was born.

Andre’ Wooten moved to the Big Island in 1980 taught at Hilo and Pahoa High Schools and worked for the Hawaii State Dept. Of Human services. He later established a litigation practice in Civil Rights, Criminal Defense, Personal Injury and Real Estate law in Honolulu in 1985. Past president of the African American Lawyers Association of Hawaii, which he co- founded in 1987, to successfully lobbied the legislature for the appointment of the first black judge in Honolulu.

In 1988, as president of the Afro-American Association of Hawaii, he helped form a community coalition which successfully lobbied the Hawaii State legislature for passage of the Martin Luther King, Jr. State holiday and the Hawaii Civil Rights Commission.

Since 1988, Andre’ has published numerous articles on History and politics in Newspapers in Honolulu, lectured in various colleges, military bases and Universities in Hawaii, and appeared scores of times in television programs in Honolulu discussing facts of the historical impact of the International African diaspora and civil rights issues.

In 1995 he and his wife formed Amen Rasta I Production Enterprises, which creates, produces and distributes educational International African history & music videos world wide. Beginning with video he shot of the Nile Valley civilizations of Nubia, KMT-Egypt, and, Kush

Over the years he has researched, traveled, shot and produced documentaries showing the history, art and culture of Ghana in West Africa, South Africa, Botswana, Zimbabwe, Brazil in South America, Fiji in The South Pacific, Cuba and Jamaica in the Carribean. Since moving to Hawaii in 1980, Atty. Andre’ Wooten has taught in the public high schools of the Big Island and lectured on African and American history, law and politics at the University of Hawaii, Chaminade University, Wayland Baptist College, Kaneohe Marine Base, Schofield Army Barracks, Pearl Harbor Naval Base and before numerous community groups.

And in 2005 he settled, a Civil Rights case, Chadd Eaglin vs. University of Hawaii Medical School. The U of H Medical school had never admitted a first year African American male student and had only graduated one black male student ever in 30 years. While passing over this qualified Big Island born Afro-Hawaiian male candidate, for both regular admissions and for “special Affirmative Action” admission, twice. Part of the settlement brought in local African American Doctors to the UH admissions screening process.

Paul Bogle led the last large scale armed Jamaican rebellion for voting rights and an end to legal discrimination and economic oppression against African Jamaicans.  Because of his efforts Bogle was recognized as a national hero in Jamaica in 1969.  His face appears on the … END_OF_DOCUMENT_TOKEN_TO_BE_REPLACED

Samuel “Sam” Sharpe (or “Daddy Sharpe”) led a rebellion which led to the end of legal slavery in the British colony of Jamaica.  Records of who his parents were have been lost.  Sharpe was a slave of an English attorney and namesake who practiced in … END_OF_DOCUMENT_TOKEN_TO_BE_REPLACED

Tuskegee Airman Howard Adolphus Wooten was born on April 20, 1920 in Lovelady, Texas to parents Johnnie C. Morris Wooten and Howard L. Wooten.  His father was the principal of the “colored school” in Lovelady, a town 100 miles north of Houston, and his mother … END_OF_DOCUMENT_TOKEN_TO_BE_REPLACED

Charles Moorehead Stokes, one of three sons of Rev. Norris Jefferson Stokes and Myrtle Garner Stokes, was born on February 1, 1903 in Pratt, Kansas. He graduated from the University of Kansas Law School in 1931 and soon after opened his law practice in Pratt … END_OF_DOCUMENT_TOKEN_TO_BE_REPLACED