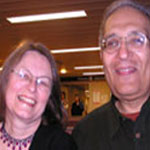 Theodore (Ted) and Marie Spearman grew up in Yakima, Washington.  Ted graduated from Stanford University in 1968 and University of Michigan Law School in 1971.  Marie earned her master’s degree in library science from Wayne State University in 1982.  In 1983 they moved back to the Pacific Northwest.  Ted practiced law for 32 years, first in Michigan and then in Washington until he was appointed to the Kitsap County Superior Court in 2004 by Governor Gary Locke.

As descendants of Washington state homesteading families, both have been interested in local and family history for many years.  Marie currently serves as a 6-county regional representative on the Washington State Genealogical Society board, writes local history articles for the Puget Sound Genealogical Society, and is President of the International Molyneux Family Association, founded by her father (Wesley L. Mullenneix, 1919-1995) in 1986, which publishes a 28-page quarterly.

Ted’s parents (Theodore Spearman, Sr., 1896-1984 and Nevada (Roberts) Spearman, 1897-2002) were ardent NAACP workers in Yakima, Washington and the west coast for decades.  Prince Hall Masonry and the Eastern Star were also a large part of their lives.  Ted’s father served as the Lodge’s Grand Master for Washington and Jurisdiction for 1954-55.