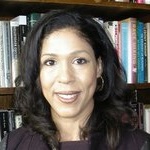 Terry Anne Scott is an Assistant Professor of United States and African American History at Hood College in Frederick, Maryland.  She earned her doctorate in history at the University of Chicago, where she was awarded the Trustees Fellowship.  Dr. Scott received her undergraduate degree in history from Arizona State University, and graduated with distinction from Southern Methodist University with a Master’s Degree in history.  The Chicago native focuses on African American social and cultural history, political movements, sports, urban history, and the South.  She is currently completing two monographs.  The first explores how lynching, once a strictly punitive and largely clandestine form of political and labor domination, evolved into publicly viewed, well-attended, frequently commercialized exhibitions of racial violence.  Her second monograph is the authorized biography of NBA legend Lenny Wilkens.  Dr. Scott is also the co-editor of the forthcoming anthology Seattle Sports:  Play, Identity, and the Pursuit of Credibility in the Emerald City.  Dr. Scott has worked on multiple public history projects, including an investigation of Freedman’s Cemetery, a nineteenth century African American burial ground in Dallas, Texas.

On the morning of May 15, 1916, approximately 15,000 people gathered near Waco, Texas to witness the trial and lynching of Jesse Washington, an eighteen-year-old black man charged with the bludgeoning death of Lucy Fryer.  The brutal murder of Washington provided the newly formed National Association for the Advancement of Colored People … END_OF_DOCUMENT_TOKEN_TO_BE_REPLACED

James Byrd, Jr. is considered one of the last lynching victims in the United States. On the morning of June 7, 1998, 49-year-old Byrd left his parents’ residence and was walking home alone along Huff Creek Road in Jasper, Texas.  He was approached by three white men, John William … END_OF_DOCUMENT_TOKEN_TO_BE_REPLACED

On Friday, February 3, 1893, Henry Smith was lynched in Paris, Texas, in front of an estimated 15,000 spectators. His death was one of the earliest spectacle lynchings on record.  The heinousness of Smith’s death captured the attention of journalist and anti-lynching advocate Ida B. Wells.  She included a detailed … END_OF_DOCUMENT_TOKEN_TO_BE_REPLACED

On Thursday, March 3, 1910, a Dallas, Texas mob lynched Allen Brooks, a fifty-seven-year-old African American man. His murder was one of a number of lynchings in major Texas cities. Little is known about Brooks’s early life. He was born in either Maryland or Texas around 1853. By the … END_OF_DOCUMENT_TOKEN_TO_BE_REPLACED