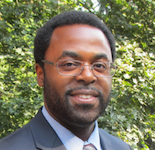 Marc Arsell Robinson is an Assistant Professor of History at California State University San Bernardino (CSUSB), and teaches courses on U.S. and African American History. His research focuses on the Civil Rights Movement in the Pacific Northwest, and he published “The Black Campus Movement in the Evergreen State: The Black Student Union at the University of Washington and Washington State University, 1967-1969,” in the Pacific Northwest Quarterly, 103:2 (Spring 2012): 55-66. In addition, he has published other essays and book reviews in venues such as Blackpast.org, The Western Journal of Black Studies, Reference Services Review, The Journal of Black Studies, and The Journal of African American History. He earned his Ph.D. in American Studies from Washington State University, and a Bachelor’s degree in History from the University of Washington. Before CSUSB, Robinson was Visiting Assistant Professor of History and Ethnic Studies at Whitworth University, and there he won the 2017 Provost’s Junior Faculty Award for outstanding teaching and service. Prior to that, he was an adjunct instructor in Critical Culture, Gender, and Race Studies, and a full-time administrator in diversity affairs at Washington State University. Currently, Robinson is writing a forthcoming monograph on the Black Student Union and the Black Power Movement in the state of Washington during the late-1960s.

The Pulaski Race Riot occurred in Pulaski, Tennessee on January 7, 1868, when local whites shot, and killed or wounded, six African American men.  The origin of the riot was a conflict that began with two men with the same first name: Calvin Carter, black, and Calvin Lambeth (or Lamberth), … END_OF_DOCUMENT_TOKEN_TO_BE_REPLACED

“Image Ownership: Public Domain” Dr. Tulinabo S. Mushingi was the U.S. Ambassador to the West African nation of Burkina Faso.  After nomination by President Barack Obama and his confirmation by the U.S. Senate, Mushingi arrived in Ouagadougou, the capital of Burkina Faso, and began serving … END_OF_DOCUMENT_TOKEN_TO_BE_REPLACED

Niamey is the largest city and capital of the West African nation of Niger.  Niamey is located in the southwestern part of the country along the left bank of the Niger River.  Niger is the largest nation within West Africa in terms of physical size, … END_OF_DOCUMENT_TOKEN_TO_BE_REPLACED

Nassau is the capital city and chief port of the Commonwealth of the Bahamas, an archipelago of over 700 islands that stretch from 50 miles southeast of Florida.  Nassau is located on New Providence Island and is the largest city in the Bahamas; approximately two-thirds … END_OF_DOCUMENT_TOKEN_TO_BE_REPLACED