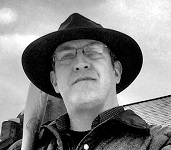 He is a Central Washington sports memorabilia collector and historian. A self-proclaimed microfiche junkie, Ty has spent the last decade scouring Pacific Northwest sports pages with a focus on Pre-World War 2 African American baseball. He was a research contributor for the 2014 Northwest African American Museum exhibit, “Pitch Black: African American Baseball in Washington,” weekly guest writer for the 100th Anniversary of the Negro Leagues “Diversus Voces” series, and is author of Darkhorse: The Jimmy Claxton Story. He is a right-handed hitter with no glove or speed.

Wilson Alexander, Sr. was the third of seven children born on in 1919 to Charles and Pearl Alexander of St. Mary Parish, Louisiana. Alexander grew up in a a tight-knit community of sugar plantation sharecroppers in southern Louisiana. On July 24, 1942, he was drafted … END_OF_DOCUMENT_TOKEN_TO_BE_REPLACED