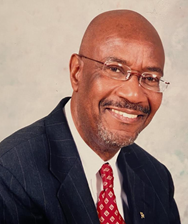 Otis D. Alexander, Library Director at Saint John Vianney College Seminary & Graduate School in Miami, Florida, has also directed academic and public libraries in the District of Columbia, Indiana, Texas, and Virginia. In addition, he has been a library manager in the Virgin Islands of the United States as well as in the Republic of Liberia. His research has appeared in Public Library Quarterly, Scribner’s Encyclopedia of American Lives, and Virginia Libraries journal. Alexander received the Bachelor of Arts and Master of Science degrees from the University of the District of Columbia and the Master of Library & Information Science degree from Ball State University. He earned a Doctor of Philosophy degree from International University and studied additionally at Harvard Graduate School of Education Leadership for Academic Librarians, Oberlin Conservatory of Music Voice Performance Pedagogy, and Atlanta University School of Library & Information Studies.

Blues percussionist, guitarist, composer, lyricist Cedric Burnside was born on August 26, 1978, in Memphis, Tennessee, to Calvin Jackson, a Blues percussionist, and Linda Burnside from Holly Springs, Mississippi, where Cedric was reared. He grew up in his grandfather’s home, the legendary North Mississippi hill … END_OF_DOCUMENT_TOKEN_TO_BE_REPLACED

An alternative country blues singer, banjoist, guitarist, composer Amythyst Kiah was born in 1990 in Chattanooga, Tennessee but now resides in Johnson City, Tennessee. At an early age, she was encouraged and supported by her parents to play musical instruments. She started with the guitar and … END_OF_DOCUMENT_TOKEN_TO_BE_REPLACED

Country music singer and lyricist Kane Allen Brown was born on October 21, 1993, in Chattanooga, Tennessee to Tabatha Brown, a European American and an unknown African American father.  He experienced homelessness with his mother, living in a car. He has one sister, Heidi Swafford. … END_OF_DOCUMENT_TOKEN_TO_BE_REPLACED

College athelete John “Jack” Green Trice, an only child, was born on May 12, 1902, in Hiram, Ohio to Green and Ann W. (Wilcoxson) Trice. Green Trice, a former Buffalo Soldier in the 10th Cavalry, was from Hardeman County, Tennessee, and Ann Trice was from … END_OF_DOCUMENT_TOKEN_TO_BE_REPLACED

Historian, athlete, and professor Otey Matthew Scruggs was born in the seaport town of Vallejo, California, on June 29, 1929 but reared in Santa Barbara. He was the son of Otey Scruggs and Maude Smith Scruggs. He had one sister, Consuelo Scruggs Devereaux. Scruggs attended … END_OF_DOCUMENT_TOKEN_TO_BE_REPLACED

Composer, Lyricist, and Rhythm & Blues Singer, Lloyd Price, was born on March 9, 1933, in Kenner, Louisiana, to Louis Price and Beatrice Price, entrepreneurs who owned a restaurant. There were 12 children in the home where Price played the trumpet and piano at an … END_OF_DOCUMENT_TOKEN_TO_BE_REPLACED