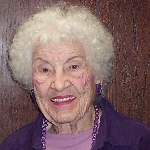 Winnifred (Castle) Olsen holds a from B.A. Washington State College, 1938. She worked as Tacoma Public Schools Northwest History Specialist from 1967-84 and is the author of “For the Record—A History of the Tacoma Public Schools,” published in 1985. She was recognized as a WSU Alumna of Achievement in 1997. She received the Washington State Retired Teacher’s Outreach Award in 2000 and the Olympia YWCA Lifetime Achievement 2003. She has been a member of the Thurston County Historic Commission since 1984. Mrs. Olsen was the guiding force for the Bush Family Interpretative Center project, completed in 1997 on the Bush Land Claim in Tumwater and has spoken and written widely on the Bush family.

William Owen Bush was the eldest son of George and Isabella Bush. George Bush was a mixed-race settler who came with his large family to what is now the Tumwater, Washington area in 1845. The Bushes and their sons, William Owen, Joseph Tolbert, Rial Bailey, … END_OF_DOCUMENT_TOKEN_TO_BE_REPLACED

As one of the earliest permanent American settlers on Puget Sound in 1845, George Bush played a vital role in the beginnings of Washington Territory. Bush’s story is even more remarkable because he was a man of mixed race who overcame prejudice and discrimination to … END_OF_DOCUMENT_TOKEN_TO_BE_REPLACED