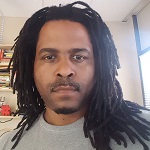 Dr. Timothy E. Nelson’s multi-faceted work concerns racism, ambition and the search for opportunity. These themes were revealed in his Ph.D. dissertation about the early 1900’s New Mexico frontier community, Blackdom, and they remain relevant today.

Dr. Nelson’s dissertation The Significance of the Afro-Frontier in American History: Blackdom, Bawdyhouses, and Barratry in the Borderlands, 1900-1930 tackled foundational issues in African American history, the history of the U.S. West, borderlands history, and the history of African diasporas.

During his time completing a Master’s degree in Black History at the University of Northern Iowa, Dr. Nelson also earned a commission as an Officer in the U.S. Army. He earned his Ph.D. from the University of Texas at El Paso. He was the Racial Justice Director at the YWCA El Paso del Norte Region—the largest YWCA in the United States. He is also a proud charter member of his chapter of Phi Beta Sigma, whose motto is “Culture For Service and Service For Humanity.”

Once Dr. Nelson discovered and delved into the forgotten history of Blackdom, the seemingly disparate chapters of his life began to seem intertwined. Dr. Nelson tracked down descendants of original Blackdomites across the U.S. and found descendants in Compton. These young people are surprised and interested to learn of “black cowboys” in their recent family history.

Dr. Nelson has provided the most in-depth research on Blackdom to date and he has challenged how the history has been framed. Instead of a story of a failed township made up of black people fleeing racial violence, lynching, and second-class citizenship, he found that the Blackdomites left the South (and the racist mid-west) to seek out opportunities and freedom in the creation of “autonomous black communities.” Following their economic and social ambitions, black people sought out literal and figurative spaces of freedom that afforded them the opportunity to develop their skills, aspirations, and dreams.

Through his 2015 dissertation as well as his current outreach and continued research, Dr. Nelson’s goal is uncovering and advocating for untold stories, educating and intersectionality training.

Blackdom Oil Company started in 1919 during the Red Summer which marked a year of nationwide violence against Black people. That year Blackdom, New Mexico’s only all-black town, entered into contracts with National Exploration Company and Mescalero Oil Company. Oil was first discovered in southeastern … END_OF_DOCUMENT_TOKEN_TO_BE_REPLACED

In the early 1900s, the Pecos Valley Region of Southeastern New Mexico Territory experienced an economic boom because of an influx of settlers into the area. African American families were among those settlers.  They built Blackdom, the only all-black town in the territory and situated … END_OF_DOCUMENT_TOKEN_TO_BE_REPLACED