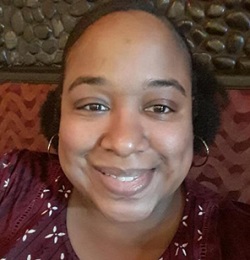 Nafeesa H. Muhammad is an assistant professor of history at Lincoln University in Pennsylvania. Her areas of interests are 19th and 20th century United States, African American, Transnational, and African Diasporic history. She specializes in the history of the Nation of Islam (NOI) and the movement of Black Nationalism in America. Nafeesa earned her B.A. from Spelman College. She also has a M.A. in African American Studies and a Ph.D. in history from Georgia State University. Her current book project focuses on the economic endeavors of the NOI. Her forthcoming article “Forging Heaven: The Nation of Islam’s Transnational Connection in the Creation of its Economic Program, 1950-1975” examines the NOI’s alliances with communities in Africa and Central America.

Twenty-four-year-old Olubukola Abiona is one of the front line researchers in the battle against COVID-19. Since 2017, Olubukola Abiona has been working as a post-baccalaureate Intramural Research Training Award (IRTA) scientist at the National Institutes of Health Vaccine Research Center in Bethesda, Maryland to develop … END_OF_DOCUMENT_TOKEN_TO_BE_REPLACED

Jemel Roberson was born to Beatrice and John Roberson in South Africa on April 4, 1992. Soon afterwards the family moved to Chicago, Illinois where Roberson grew up. His friends and family remember him as a playful and caring child. Roberson attended Lane Tech Prep … END_OF_DOCUMENT_TOKEN_TO_BE_REPLACED

Markeis McGlockton was an artist who could draw virtually anything. He was a loving father to three children with his girlfriend, Britany Jacobs, and an aspiring rapper who loved making music videos with his friends. McGlockton was born to Monica Moore-Robinson and Michael McGlockton on … END_OF_DOCUMENT_TOKEN_TO_BE_REPLACED

Sister Ethel Muhammad Sharrieff was the Supreme and National captain of the women’s auxiliary unit of the Nation of Islam (NOI) known as the MGT (Muslim Girls Training) between 1950 and 1975. She was the second child and oldest daughter of eight children born to … END_OF_DOCUMENT_TOKEN_TO_BE_REPLACED

Minister Abdul Rahman Aquil Muhammad (or Brother Rahman, as he was known) was the Southern Regional Minister for the Nation of Islam (NOI) from 1969 to 1975. He was born Samuel Saxon Jr. in Burke County, Georgia in 1931 and joined the NOI in 1956 … END_OF_DOCUMENT_TOKEN_TO_BE_REPLACED

In the following article, historian Nafeesa Muhammad describes the often lauded but understudied economic program of the Nation of Islam (NOI). Here she focuses on the economic development plans put in place under the NOI’s longtime leader, Elijah Muhammad and their impact on African American … END_OF_DOCUMENT_TOKEN_TO_BE_REPLACED