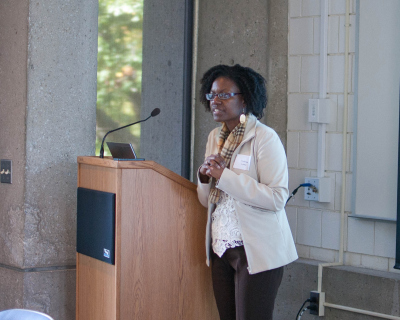 Dr. Lowe served as NPS Southeast Regional (SER) Historian and manager for the SER Cultural Resource Research and Science Branch, and also had the privilege to serve as Acting Superintendent of Cane River Creole National Historical Park. She also worked in the Region’s Office of Interpretation and Education, where she was the Regional Program Manager for the National Underground Railroad Network to Freedom program assisting communities and stewards to tell the stories of Black resistance to enslavement through escape and flight.

Dr. Lowe also has worked as national Program Manager for the Cultural Resources Diversity Internship Program and a staff reviewer for the National Register of Historic Places and National Historic Landmarks programs. One of her favorite projects was analyzing and assisting with increased nomination and designation of historic sites associated with the histories of people of color and other underrepresented communities through the 2006 Preserve America Summit.

Dr. Lowe consulted as a Principal Investigator on historic preservation projects in collaboration with the NPS Seattle Support Office, investigating the history of civil rights in the Pacific Northwest and identifying historic properties for potential preservation and interpretation efforts.

George Putnam Riley, a native of Boston, Massachusetts, was an important figure in the Pacific Northwest during the nineteenth century. Riley’s grandfather fought in the Revolutionary War under General Israel Putnam, and his middle name probably refers to his grandfather’s commander. His father, William Riley, was a clothing … END_OF_DOCUMENT_TOKEN_TO_BE_REPLACED

Mary Ellen Pleasant was born on Aug. 19, 1814 in Virginia and spent her early years in Nantucket, Massachusetts.  She worked as a bond servant to the Hussey family, an abolitionist family.  She later married James Smith, a wealthy former plantation owner and an abolitionist.  … END_OF_DOCUMENT_TOKEN_TO_BE_REPLACED

Born on Aug. 6, 1865 in Chillicothe, Ohio to George R. and Mary Elizabeth (Gatliffe) Ryan, John Henry Ryan was one of twelve children.  Ella (Alexander) Ryan’s origins are more unclear; however she was raised in Missouri as one of at least three children.  John … END_OF_DOCUMENT_TOKEN_TO_BE_REPLACED

The first black Baptist congregation in South Carolina was formed in 1773 on the Galphin Plantation near Silver Bluff, 14 miles northwest of  Savannah, Georgia.  The church was founded jointly by Rev. Wait Palmer, a white Connecticut minister, and African American pastor, George Liele.  The … END_OF_DOCUMENT_TOKEN_TO_BE_REPLACED