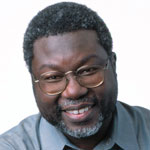 Jerry Large is a columnist for the Seattle Times. Born in Clovis, New Mexico in 1954, Large has a B.A. in Journalism from New Mexico State University.  He has worked for the Clovis News-Journal, the Farmington, New Mexico Daily Times, the El Paso Times and the Oakland Tribune before his hiring by the Seattle Times in 1981.  Married to Seattle Times reporter Carey Quan Gelernter, the couple have one son, Tao.

Large’s interest in history, social justice, and race are rooted in his personal history. He grew up hearing stories about his maternal grandfather, a sharecropper, being lynched in Texas in the early 1930s. Large’s mother left school at 15 to pick cotton and clean houses for white families while raising three sons alone. He grew up in Clovis, New Mexico, which had a noticeable hierarchy. Whites folks sat at the top, Mexican-Americans in the middle, and black folks at the bottom, which started him thinking and now writing about, how we came to be where we are and how we might keep making improvements to our constantly-evolving country.

In the article below Seattle Times columnist Jerry Large provides his perspective on the importance of the Obama victory for the Presidency on Nov. 4, 2008 and the way it forever changed the United States. Barack Obama’s victory opened a new door of possibilities for … END_OF_DOCUMENT_TOKEN_TO_BE_REPLACED