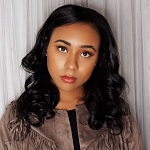 Kyla Murray, a Chicago native, is currently a Graduate student at Syracuse University in the African American Studies department; pursuing a Masters degree in Pan-African Studies. Graduating from Oglethorpe University in 2017, Kyla spent her senior year of undergraduate course work at the University of Oxford in England. It was there where she studied the effects of slavery on British and American social, political, and educational frameworks. Researching the works of W.E.B. DuBois’ concept of “double consciousness”, and Paul Gilroy’s attitudes on hyphenated identities and critical race theory, Kyla was able to develop her passion for African American studies and Pan-Africanism.

Attempting to conduct her research through a transnational lens, Kyla sought to to dichotomize the relationship between racial essentialism, and Black hyphenated identity, and the effect it had on socioeconomic aspects of Britain and the United States. Kyla’s undergraduate degree in Art History with a focus on African art developed the frameworks for theoretical thinking within the African Diaspora.  In 2016 at the Oglethorpe University Museum of Art (OUMA), Kyla possessed full curatorial leadership over two exhibits that were showcased Summer 2017: Hispaniola and The Reconciliation of Rwanda. Her current project at Syracuse University focuses on aspects of identity politics and visual art. For Kyla’s research she will be examining the ways in which we conceive, illustrate, and orientate Black hyphenated identities in a post-colonial nation through visual art. She will be placing a strong focus on African American, and Afro-Caribbean identities in an attempt to find a way to decolonize Black identity. Kyla’s passion for art, poetry, and both identity and Black politics is rooted in her experience as a woman of color growing up on the South side of Chicago.

Cleveland’s Hough Riots of 1966 was the first major racial uprising of the decade in an Ohio city but preceded by two years the much more extensive uprising there in the aftermath of the assassination of Dr. Martin Luther King, Jr. in April 1968.  It was, however, a continuation of a … END_OF_DOCUMENT_TOKEN_TO_BE_REPLACED