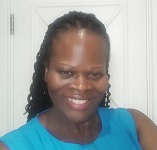 Melinda Jones is a lover of history, culture, literature, film, and music. She is an independent researcher and historian who received her B.A. in English from Saint Xavier University in 2007, with a concentration in creative writing. She is a published writer, poet, and blogger, and creator of a writing workshop titled Everyone Has a Story to Tell that teaches women to find their voice through writing. She has also written several blues-inspired works, including a full-length novel and adapted screenplay titled Black Rock, a collection of poetry titled Blues in Open G, and served as a panelist at the Chicago Blues Festival and DePaul University. In addition to history, culture, literature, film, and music, other research interests include the African Diaspora, cooking/ food, and religion.

In 2018, Lauren Underwood was elected to the U.S. Congress representing the 14th Congressional district of Illinois which is suburban Chicago. She is the first African American woman to represent the district, defeating incumbent Republican Congressman Randy Hultgren. At age 32, she is also the … END_OF_DOCUMENT_TOKEN_TO_BE_REPLACED